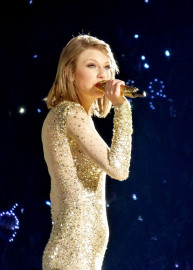 Given the devotion that celebrities attract, legal matters involving the adored figures tend to draw rapt attention no matter how marginal their cases are. Since the 2006 release of her self-titled debut album, Taylor Swift has come to merit the adulation of millions of fans, many of whom will undoubtedly seek constant updates when her civil trial against a radio personality commences Monday. However, those who are fortunate to take in the Denver-situated testimony will not have permission to emblazon themselves with clothing or buttons that make their allegiance obvious, nor will they be able to use banners, posters or signs in the hope that the singer has the scales of justice tip in her favor.

The 27-year-old does not have to appear at the courthouse until Tuesday, when opening arguments will likely begin. She will find herself in the Colorado capital to countersue David Mueller, who, she claims, groped her during a 2013 meet-and-greet at the city’s Pepsi Center. Losing his job two days after the supposed indiscretion, the radio host—let go from employer Lincoln Financial Media for reportedly violating the morality clause of his contract after it independently determined that he had lied about the incident—filed a lawsuit against Swift in 2015, contending that she pressured the station to let him go.

When they seek to settle the bad blood between them, the two will do so minus overt displays of support for either of them. Because of her high-profile status, the ban on the aforementioned items by U.S. District Court clerk Jeffrey Colwell will certainly have more bearing on those there to back Swift, but no matter which party the 32 courtroom attendees and 75 overflow room viewers of closed-circuit coverage wish to emerge the victor, they must treat the proceedings with the utmost respect.

The now-four-year-old matter is likely to have legal resolution within nine days, according to the Denver Post. Mueller, who alleges that former colleague Eddie Haskell—also a respected business acquaintance of the award-winning performer, according to her countersuit, committed the transgression—is looking to recoup lost income and Swift, whose counterclaim wishes to inspire women “who may resist publicly reliving similar outrageous and humiliating acts” to speak up, is seeking to tab him as the actual offender. If she emerges victorious, she will send her settlement to “charitable organizations dedicated to protecting women from similar acts of sexual assault and personal disregard.”

Because of the sensitivity of the case and the popularity of the chief participant, Colwell is definitely justified in striving to keep attendees’ garb and other materials from swaying the jury, whose selection will occur Monday. Promotional products can prove very effective psychological tools, but, in the halls of justice, they can definitely leave legal figures seeing “Red.”