Greg Piatek walked into the Happiest Hour in Manhattan last January, and the bartender told him he would not be served.

“It’s really sad,” Piatek, an accountant from Philadelphia, said. He called it “ridiculous.”

After all, Piatek’s lawyer argued that his client was denied service due to his spiritual beliefs.

The judge’s response? Wearing a “Make America Great Again” hat is not a spiritual exercise, and the bar asking him to leave was “not outrageous conduct.”

Piatek said that the bartender told him, “Anyone who supports Trump—or believes what you believe—is not welcome here. And you need to leave right now, because we won’t serve you.” 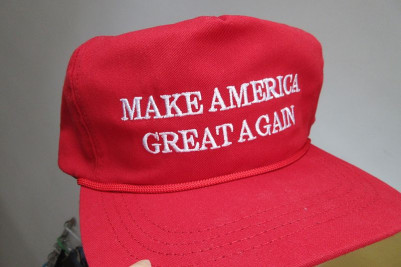 Greg Piatek and his lawyer tried to argue that wearing a 'Make America Great Again' cap was a 'spiritual tribute.' | Credit: Wikimedia Commons by Chamtrumping

The bartender was seemingly unaware that Piatek was wearing the hat as more than just a signifier of his political beliefs, but as a reverent show of respect and patriotism. At least that’s what his lawyer, Paul Liggieri, tried to argue.

“The purpose of the hat is that he wore it because he was visiting the 9/11 Memorial,” Liggieri said. “He was paying spiritual tribute to the victims of 9/11. The Make America Great Again hat was part of his spiritual belief. Rather than remove his hat, instead he held true to his spiritual belief and was forced from the bar.”

Judge David Cohen was incredulous, and asked how many people adhered to this particular belief system.

Liggieri confirmed that it is, in fact, a one-man sect.

In his dismissal of Piatek and Liggieri’s argument, Cohen said that Piatek "does not state any faith-based principle to which the hat relates.”

The decision sets an interesting precedent for similar situations involving political apparel in the future. And the debate coincides with the ongoing issue of the legality of political apparel at voting places, which has triggered an even more complicated debate about what constitutes politically-charged apparel. It’s a question that even has Supreme Court justices scratching their heads.

And if the highest court in the U.S. is having trouble with that ethical tug-of-war, it’s safe to assume that while one business proprietor might take issue with a customer’s apparel or headwear, others might be in full support.

In the case of Piatek and his lawyer, the judge's decision wasn't what they had hoped for. The two plan to look into an appeal.