It must be strange to be a celebrity. After all, who else can carry out a very public feud via T-shirts? Thankfully, we all got to watch the mayhem unfold between Justin Bieber and Marilyn Manson.

Here's how it all went down. According to People, Bieber used an unauthorized photo of Manson on the front of a $195 Purpose Tour T-shirt featuring the phrase "Bigger Than Satan...Bieber" on the back. 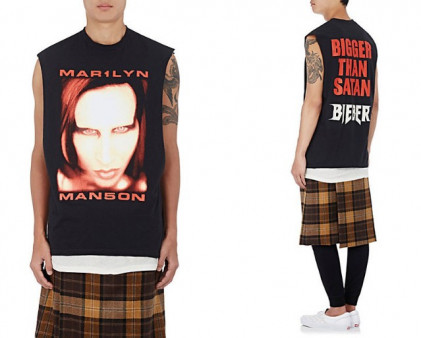 Marilyn Manson was not happy that Justin Bieber used his photo without permission. (Image via People)

The creator of the T-shirt, Fear of God's Jerry Lorenzo, said Manson signed off on the T-shirt design, but according to Manson, that was not the case.

Not only that, but Manson claimed Bieber told the rocker, "I made you relevant again." Manson did not appreciate the sentiment, and called Bieber arrogant, among a slew of other negative phrases.

Manson said he eventually took all the proceeds from the T-shirts, but it was not until now that the feud seemed resolved. Apparently, Bieber texted an apology to Manson, and all seems forgiven.

The moral of the story seems to be one that Kendall and Kylie Jenner learned the hard way: Do not use anyone's photos for your merchandise without their permission.