Justin Bieber Slaps His Name on Marilyn Manson Shirt, Sells It for $200 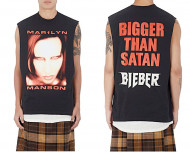 Justin Bieber is selling this Marilyn Manson T-shirt for $195. (Images via Barneys)

It seems like Justin Bieber just can't get this whole merchandise thing right. First, he had to recall T-shirts from his "Purpose" tour after fans noticed a typo on the back. Then Philadelphia Flyers fans got mad (surprise!) at him for wearing a personalized jersey with the same number as Flyers legend Bobby Clarke. Now, Bieber essentially is selling a Marilyn Manson shirt with his own name on the back. It's not even inspired by or styled off of a Manson shirt, it literally is a Manson shirt.

And, you know, selling a T-shirt with a completely unrelated artist's name and face on the front is one thing. But our old pal Biebs is selling the shirt for $195, according to the AV Club. That's a bit more than the original Manson shirts, which fans can pick up for less than $20 at Hot Topic. (Yes, it is the exact same shirt, but with sleeves and sans Bieber's name and "Bigger Than Satan" on the back.)

It's almost reminiscent of Michael Scott, Steve Carrell's character from "The Office," attributing a classic Wayne Gretzky quote as his own. Bieber really just pasted his put his own name on another artist's merchandise. 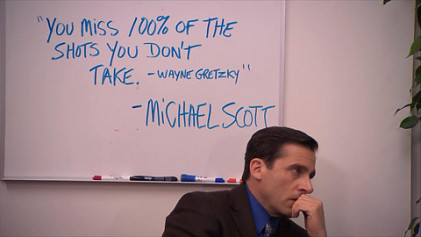 The sleeveless shirt is, according to Barneys, "inspired by [Bieber's] blockbuster show, as well as looks warn by the multitalented performer on stage." Other items in the tour collection include $325 sweatpants, an $840 kilt, a $1,675 bomber jacket and a $700 sleeveless flannel.

But, before we all cry foul on Bieber in a legal sense (it's fair to call foul in the lack-of-creativity sense), Manson reportedly gave Bieber and the T-shirt's designer permission to reinterpret the original design, according to Consequence of Sound.

"Thank you, Marilyn Manson, for signing off on the 'Bigger than Satan' x #jb tee," designer Jerry Lorenzo wrote in an Instagram post. "Thanks for understanding our approach and re-interpretation of your vision. Never would of [sic] thought printing on my vintage T-shirt collection would take us this far!"

The T-shirt, along with the rest of the collection, is available at high-end retailer Barneys.