Justin Bieber is one of the biggest stars on the planet, so it's no surprise that his merchandise tie-in with fellow Canadian icon Tim Hortons sold out pretty much immediately.

Timmies chief marketing officer Hope Bagozzi announced this weekend that the franchise plans to restock items in locations all across North America, according to Narcity, but that hasn't stopped frenzied fans from buying existing merchandise at marked-up prices.

"We know that many restaurants sold out of all of their merch very quickly—many on the very first day that Timbiebs launched," Bagozzi said. "We're happy to share that we've given restaurants that have already sold out the ability to order more stock."

Get your Timbiebs merch while it's hot hot hot.

Canada & US restaurants only, while supplies last. pic.twitter.com/g2tUYmqJOB

The hope is that people buy from Tim Hortons locations once the restocks happen, rather than from resellers.

According to the Toronto Star, items like the Timbiebs fanny pack, which originally retailed at $29.99, are listed on resale sites like eBay for $2,500. Much like the BTS McDonald's meals, where people resold the greasy bags just because they had the band's logo on it, used Timbiebs boxes are listed for as high as $100. 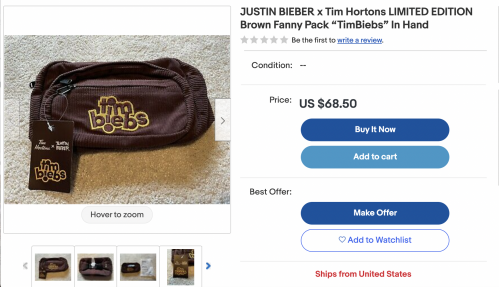 One listing even says that it comes "with crumbs used," and is in "great condition." Others are straight-up selling them with the Timbits still inside. 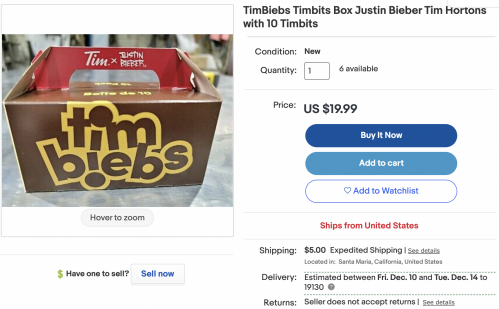 The restock is reportedly going to be limited, so it's safe to say that resale will continue as long as there's matching demand for the products.