Before last year’s squad registered a 4-8 mark, the University of Oregon football team had tallied 11-consecutive winning seasons, including seven-straight double-digit victory tallies. Under first-year coach Willie Taggart, the Ducks again will look for top billing in the Pac-12 Conference, but no matter what the scoreboards will say over the next three months’ worth of Saturdays, the gridiron performers will prove triumphant Sept. 9 when they welcome the University of Nebraska to Autzen Stadium. The matchup will no doubt test their readiness to return to prominence, but it will also show how intact their humanity is, as they will don uniforms designed by juvenile cancer survivors.

The courageous kids, 10-year-old Sophia Malinoski, 13-year-old Ethan Frank and 14-year-old Joe MacDonald, have teamed up with the collegiate athletes through Nike, the club’s outfitter, and the Doernbecher Children’s Hospital at Oregon Health & Science University. For the last 14 years, the entities have helped patients pair with professionals to design limited edition apparel, with $17 million in proceeds benefiting the hospital. Their handiwork will serve as the Ducks’ means to commemorate Childhood Cancer Awareness Month and will mark the initial instance that a collaboration between youths and their equally creative elders will adorn the players’ frames. 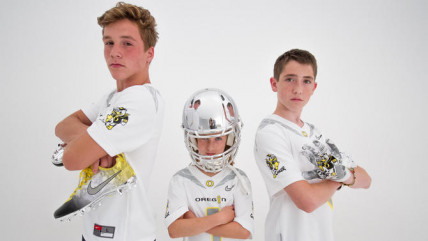 These brave cancer patients will be rooting for the Oregon Ducks to emerge victorious while wearing their designs. | Credit: Nike

“I really think that this is the most important uniform that Oregon has ever worn,” Nike Creative Director Todd Van Horne said yesterday through a Doernbecher-situated unveiling. “I really, really hope that this helps raise the funding and awareness to beat childhood cancer.”

The “C” word is never a pleasant topic, and Nike has coupled with the University of Oregon before to intensify discussions of methods to detect, treat and, hopefully, eradicate it, with October 2014’s pink uniforms promoting Breast Cancer Awareness Month. For their home tilt against a formidable non-conference foe, the Ducks have Sophia, a brain cancer patient from Portland, to thank for the reflective helmet, sideline gear and fan apparel that features the school’s mascot stomping out cancer; Ethan, another brain malady fighter from Medford, for the jersey and gloves, the latter merging to say “Overcome” on the knuckles; and Joe, a Leukemia battler from Gresham, for the cleats, pants and socks.

“We will do everything in our power to play with the same tenacity exemplified by Sophia, Ethan and Joe, and wearing this uniform is a great chance to honor them and their spirit and efforts,” Taggart offered at the announcement.

According to curesearch.org, doctors diagnose nearly 16,000 children with cancer each year, a staggering figure that makes all efforts to support the youngsters’ welfare that much more commendable. For its latest altruistic display, the University of Oregon will begin selling the attire Sept. 4. When its Ducks welcome the Cornhuskers five days later, expect for the venue to contain nearly 60,000 fans hoping not only for a successful early-season gut check but also a loving late summer opportunity to beat cancer at its game.