This Story About Kanye West and 'Blexit' Apparel Keeps Getting Weirder 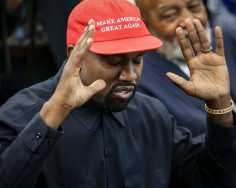 Kanye West is no stranger to apparel. Even a few years ago, he was making millions off his tour merchandise and apparel pop-ups. It looks like the hip hop mogul decided to divert his attention from his successful Yeezy sneaker launches to focus on political apparel.

According to USA Today, West created a line of hats and apparel that featured the phrase "Blexit," which is short for "Black Exit." (You know, like Brexit.) The point of the collection was to encourage black voters to leave the Democratic Party.

West worked with Candace Owens, the campaign's communication director, on the merchandise, which was debuted at the Turning Point USA's Young Black Leadership Summit in Washington last week.

"Blexit is a renaissance and I am blessed to say that this logo, these colors, were created by my dear friend and fellow superhero Kanye West," Owens announced to the crowd, according to USA Today.

Since then, West made an announcement on Twitter that he would be stepping away from the political world.

My eyes are now wide open and now realize I’ve been used to spread messages I don’t believe in. I am distancing myself from politics and completely focusing on being creative !!!

West definitely received some backlash over the Blexit apparel launch, so it's possible this influenced his recent departure from politics. Although, the story might be even more complicated than that. According to West, he did not actually design the collection. He claims Owens, in fact, designed the apparel, and he wants nothing to do with the apparel. Who knows what's true anymore in this story, but it looks like no one wants to actually take credit for the collection.

His main apparel collections are still wildly successful, so it's safe to assume his work with Adidas will probably continue despite this news.

West's decision comes just days before the Nov. 6 election day. Political apparel has become a crucial topic leading up to it, with nine states banning political apparel from the polls. In the other states, it will be interesting to see if any voters don the rapper's political hats while submitting their ballots.