Leonard partnered with the Clippers Foundation and the nonprofit Baby2Baby to give away one million Clippers branded backpacks to students in the Moreno Valley Unified, Inglewood Unified and Los Angeles Unified School Districts.

𝐁𝐞 𝐆𝐫𝐞𝐚𝐭.@kawhileonard returns to his Moreno Valley elementary school to kick off donating one million backpacks to SoCal students! pic.twitter.com/EDXc61m4bo

"My goal this year is to make a meaningful contribution both on and off the court," Leonard said in a press release. "This felt like the right way to get started. It was important to me to make this announcement in my hometown of Moreno Valley at my former elementary school, but the benefits this program will have across all of Los Angeles makes today even more special."

The backpack promotion was assisted by Nashville distributor Something Inked. Sports Illustrated reported that the distributor received an order for 500,000 of the backpacks, handling it all just 30 days prior to the giveaway. 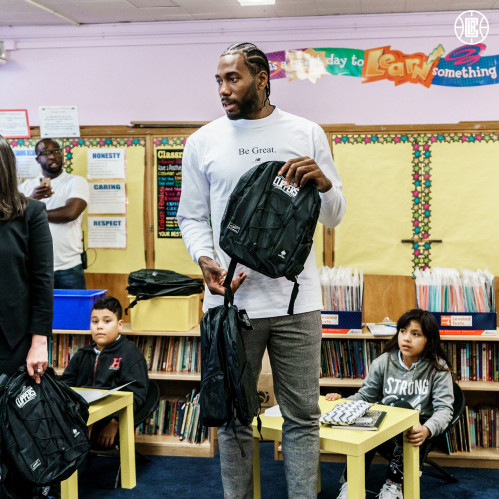 Kawhi (via Something Inked) is making sure every kid in Los Angeles forgets LeBron exists. | Credit: Los Angeles Clippers

From a completely objective human standpoint, this is a very admirable thing that Leonard is doing to give back to his community. The Clippers' press release stated that in the Los Angeles Unified School District alone, 80 percent of K-12 students are eligible for free or reduced lunch programs. So, this is an instantly effective promotion that serves the young people of Los Angeles and the surrounding area.

But we'd be remiss to ignore the marketing side of this promotion. Seriously, this is just genius. Everyone knows Los Angeles is also home to the Lakers, by far the more popular team throughout their history in LA. Leonard coming to the Clippers definitely boosts the team's profile a good amount, but now suddenly every kid in every public school in Los Angeles has a Clippers backpack. If they were on the fence between Clippers and Lakers, this could be the tipping point for them to get all in on the Clips. 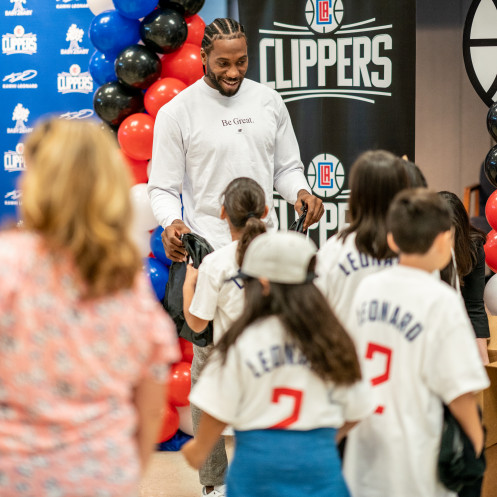 Look how happy all these new Clippers fans are. | Credit: Los Angeles Clippers

Of course, this is definitely not (the only reason) why they did it.

"There are a lot of families throughout the L.A. region working hard every day to earn everything in their lives," Gillian Zucker, president of business operations for the Clippers, said. "This program is our effort to extent a hand to make heading back to school a little easier. Our deepest appreciation goes out to Kawhi Leonard and Baby2Baby's incredible network of ambassadors who walk the walk when it comes to using their platforms and voices to provide real solutions to impact the everyday lives of the people around us."

So, Kudos to Kawhi. That's a real nice first order of business upon returning to your hometown after a high-profile free agency. Hat tip to Something Inked for handling a huge order in such a tight window of time. And the biggest round of applause for the Clippers, for making every student in Los Angeles a Clippers fan.

Good luck topping that one, Lakers. Having LeBron isn't good enough on its own anymore.

Related story: Inside Playoff Season With the Promo Distributor Behind Almost Every NBA and NHL Team's Merch