Kawhi Leonard Sues Nike Over Rights to His "Klaw" Logo

There's been a lot of attention of Kawhi Leonard lately as he challenges the Golden State Warriors in the NBA Finals. But, that's not the only battle he's fighting. According to ESPN, the Toronto Raptors star filed a lawsuit against Nike this week in the U.S. District Court for the Southern District of California. Leonard is attempting to regain control over a logo that he says he created.

"In 2011, just after being drafted to the National Basketball Association, Kawhi Leonard authored a unique logo that included elements that were meaningful and unique to him," the lawsuit reads. "Leonard traced his notably large hand, and, inside the hand, drew stylized versions of his initials 'KL' and the number that he had worn for much of his career, '2.' The drawing Leonard authored was an extension and continuation of drawings he had been creating since early in his college career." 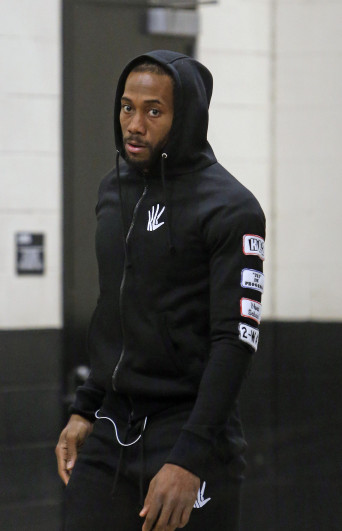 According to the suit, Leonard allowed Nike to use his logo on certain merchandise as part of his endorsement deal, but the company went ahead and filed an application for copy registration of his logo without his consent.

Although this news has been making major headlines, Leonard didn't seem that consumed by it in a recent press interview.

"It happened over a long time ago," he said. "You guys are just finding out. Not a big worry of mine."

Moving forward, the lawsuit states that Leonard wants to use his "Klaw" logo for clothing lines, footwear, sports camps and charities, but that Nike is posing a roadblock.

Oh, and in case you were wondering what the "Klaw" backstory is, the lawsuit has some details.

"Leonard is known for his extremely large hands," the lawsuit reads. "Throughout his career, spectators have noticed Leonard's large hands and they are often described as contributing to his success as a player.

"Since at least his college years, Leonard contemplated and conceived of ideas for a personal logo which would be unique to him and reflect something meaningful relating to his own image. In late December 2011 or January 2012, Leonard refined a logo he had been creating for several years that encompassed his large and powerful hands, his initials and his jersey number."

It will be interesting to see which way this lawsuit goes, but it's no surprise that Leonard is pulling out all the stops to regain his intellectual property. With more and more NBA stars looking to cash in on their own personal brands, an iconic logo is a huge opportunity for Leonard.

Our 5 Favorite Promotional Products of the Week: Punching Bags, Hall of Fame Jerseys and More

'Golfleisure,' Sun Protection and More: What to Know If You're Selling Golf Apparel in 2021