Starting Nov. 9, KFC is selling an item called the “Finger Lickin’ Chicken Mitten Bucket Hugger” (say that three times fast). It’s literally a knitted sweater (of the “ugly” variety) designed to wrap around a KFC bucket, with little mittens sewn into the side.

This winter’s hottest dining accessory fits like a glove, well, because it is one! Starting 11/9 through 11/11, anyone who orders a qualifying KFC bucket meal on https://t.co/LRobd238Aj or the KFC app can get a Finger Lickin’ Chicken Mitten Bucket Hugger while supplies last. pic.twitter.com/OD3Sd5dmVy

From now until Nov. 11, customers who order online either for pickup or delivery will receive a code to claim their free Finger Lickin’ Chicken Mitten Bucket Hugger while supplies last.

KFC didn’t specify how many it’ll give out, but with how outrageous and festive this product is, it will likely go fast. Also, it’s free! 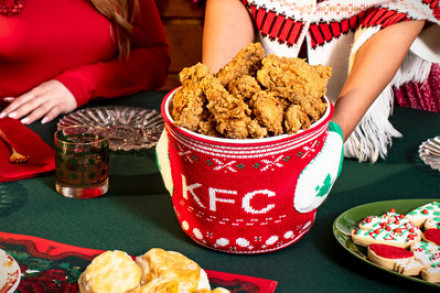 We’ve been sort of hard on the ugly sweater recently. That’s not to say we don’t love a good festive sweater. It’s just that they’re so common that companies need to do something really noteworthy to distinguish themselves from the others.