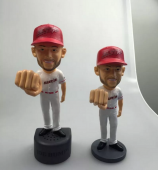 The world’s first interactive fist-bumping toy, Bump’n Buddy, is set to launch. The creator, Kevin Vaughn, owner of PromoTown powered by HALO Branded Solutions, has launched a Kickstarter campaign that will run from Oct. 24 to Nov. 23 and will allow collectible backers to be one of the first to receive a Bump'n Buddy.

According to Vaughn, the goal for the Bump'n Buddy is to become the preferred promotional product for sports giveaways, entertainment, movies and corporate mascots for real and fictional characters that provides the interaction its predecessors lacked. The item can be created in the likeness of almost anyone, and used the subject's own voice to deliver five unique audio messages to help bring the real or fictional figure to life with a fist bump.

Bump’n Buddy is the creation of Kevin Vaughn, a Michigan native, Michigan State University grad and an entrepreneur. His career began in sports and entertainment as the marketing manager for the Detroit Red Wings from 1994 to 2002. It was during this time, in 1999, that he received the Willie Mays Bobblehead. Customizing the trend to the Red Wings organization, the department developed bobbleheads including Steve Yzerman and Chris Osgood, and teamed up with Little Caesars Pizza to create the Grind Line and Scotty Bowman bobblehead promotions in the Michigan market. Vaughn’s obsession of trying to create a new product with the same "punch" as a bobblehead was born.

The inaugural Bump’n Buddy character, which Vaughn has spent years developing, is “Joe Bumparino,” aka “Joe Bumpy.” He stands approximately 9’’ tall, is made of recyclable plastic material and has some pretty cool “Bump-isms.”

"The idea of Bump'n Buddy is to create a fun, interactive collectible that continuously creates a positive and lasting impression of the person, character and brand it represents," Vaughn said.

COVID-19's Effect on the USPS and Direct Mail