In the final stanza of “The Rainy Day,” Henry Wadsworth Longfellow, addressing his “sad heart,” notes “Thy fate is the common fate of all, / Into each life some rain must fall.” As a native of Portland, Maine, the poet received plenty of meteorological proof for that couplet, and, who knows, he might have been chummy with Raincard co-founders Jacobo Motola and Daniel Raich if they had lived in the 19th century. Fortunately for us, the entrepreneurs are contemporary figures who are looking to help end-users weather the inconveniences caused by rainy weather through the world’s first credit card-size disposable raincoat, a brainchild for which they launched a Kickstarter campaign last month.

We can all vouch for Longfellow’s contention that figurative droplets (or even deluges) will affect us, as no life goes by without some conflict testing one’s resolve, and even though the global family does not receive an equal distribution of actual downpours, most of us know the annoyance that severe rain can cause. For our saturated noggins, the Raincard sounds like a solid remedy to those occasions when the clouds will not give us a break and we cannot avoid being outside. Designed, according to its Kickstarter page, to “fit in your wallet, your pocket or anywhere,” the item represents its creators’ desire to offer “a practical and easy-to-remember solution” to those unfortunate instances where Mother Nature frowns on our wish to stay dry. 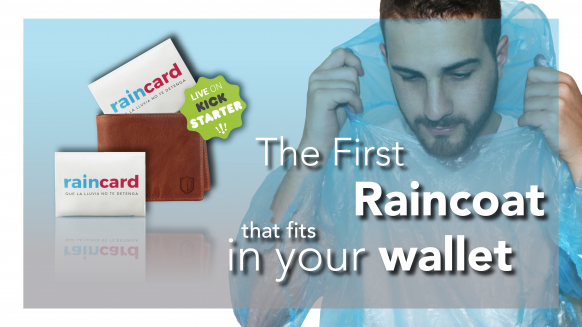 The Raincard has 23 days to go to draw enough attention for its creators to fund it in full. | Credit: Raincard

While the novelty of having a goodie that would be as effective as, yet far less bulky than, a traditional raincoat could prove effective enough to delight the masses, Motola and Raich note through the page that their labors—more than 50 homemade prototypes comprised their research—have yielded a commodity that allows for customization of the card that contains the coat and the actual garment. Geared toward ensuring “positive brand impacts,” the decorative option could breed great opportunities to make promotional splashes, with concerts, sporting events and additional outdoor gatherings—the very events that storms often stall—as sensible places to hawk the apparel possibility.

Having generated more than one third of what they need to obtain by March 24 to fund their project, the businessmen have vowed to engage in production next month if they earn enough support, with a quite generous rewards system as supplemental compensation for benefactors. Spring is nearly upon us, meaning end-users will look to shake off winter doldrums by catching some sun. On the days when rays lose out to rain, though, they should never need to cancel their plans or rely solely on umbrellas to fight back against the gloom. Motola and Raich hope to make the season a period where they can produce and promote their concept because, after all, the summer also has a reputation for being rainy in certain parts of the word, especially Mexico City, from which they are making outreach to potential backers. Here’s hoping enough people spring into action to help them, as their Kickstarter raincoat idea does not sound like the product of wet-behind-the-ears intellects.