Since catapulting to stardom through the 1998 release “Devil Without a Cause,” Kid Rock has become a bit of a factotum, with musician, singer, songwriter, producer and actor as applicable titles for the man born Robert Ritchie. Come November 2018, the 46-year-old could make a seemingly improbable addition to his résumé, as he announced yesterday that he wishes to represent Michigan in the U.S. Senate.

“The answer is an absolute YES,” he declared in tweeting about attempts to verify the legitimacy of kidrockforsenate.com.

On the site, supporters can buy the usual stock of campaign merchandise, like T-shirts, hats and yard signs. 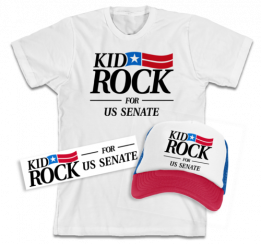 But, unlike most politicians, the store redirects supporters to buy merchandise not from a standalone campaign site, but a branch of the Warner Music Group's site, specifically, Kid Rock's online store. 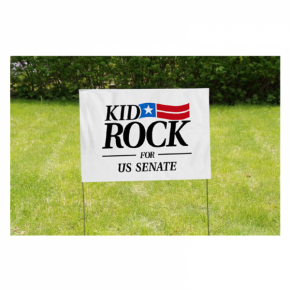 While a social media post and an attractive website with Warner Bros. Records-sanctioned merchandise and slogans such as “Get in the Senate and Try to Help Someone,” “I’ll Rock the Party” and “You Never Met a Politician Quite Like Me” will draw attention to his intentions, he will need to formalize his run by completing Federal Elections Commission paperwork, which, according to the Washington Post, he has yet to do. Having told Rolling Stone in 2013 that “I don’t like the hardcore views of either side, and I’m not in bed with anybody,” he would honor his statement that “I can’t be playing the middle” (an homage to his interest in the Libertarian Party) by running as a Republican. He has already shown allegiance to the Grand Old Party by performing at last year’s Cleveland-situated national convention and venturing to the White House in April to fraternize with President Donald Trump.

If the Romeo native were to secure the ballot placement, he would face Democrat Debbie Stabenow, who has held the seat since 2000, the year he released the compilation “The History of Rock,” the second of his eight top-10 albums. With no political pedigree, he will surely bear his share of quizzical looks and written rebukes, with Esquire already having delivered a ribbing.

The award-winning performer, who held his annual Chillin’ the Most Cruise in the spring, has not put out an album or a single since 2015, so perhaps his creative hiatus could be a product of his desire to formulate a platform, though no ideas for his hypothetical stances appear on the campaign website, or maybe it could serve as a huge advertising push for impending material. If he is seriously seeking the Republican nomination, Kid Rock, who has sold more than 26 million albums worldwide, would not require nearly that many votes to emerge victorious, but he would need an amazing turnout if he wants to be the political version of an “American Bad Ass.”