The Kids Water Bottle Turning Hydration Into a Video Game 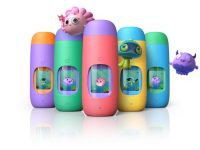 Gululu will easily help children to fulfill their daily water requirements and make a virtual friend in the process. (Image via Twitter)

Depending on one’s time zone, summer will commence a week from today or next Wednesday, but we East Coast occupants, especially those in Promo Marketing’s Philadelphia environs, could claim that the sizzling season has already shaken off its nine-month hibernation period. A heat wave has gripped us and will likely have many successors come July and August (here’s hoping September will be somewhat kinder), leading newscasters and medical experts to wax wise about the wonders of water, especially for children.

Their burgeoning bodies require ample hydration, but ensuring its acquisition can leave a parent’s patience drained. Gululu, however, wants kids and caretakers to soak in the joys of being ready to face extreme temperatures or any other sort of setting thanks to a water bottle through which users’ consumption helps animated creatures grow.

One could argue that manufacturers can never go wrong when developing interactive material for youths, and Gululu, the product of a 2016 Kickstarter campaign by Bowhead Technology Inc., is looking to laud the liquid as an increasing must through the innovative container. The gadget’s website includes a study by the Harvard T. H. Chan School of Public Health that shows more than half of all children and adolescents are not taking in enough water, possibly leading to lackluster health, cognitive impairment and poor emotional development. The invention seeks to prevent those problems by letting children choose a virtual pet from the Gululu Universe. As the youngsters replenish themselves from the 13.5-ounce holder, the creatures become their “companions” and develop emotions, even calling on feelings of loneliness and sadness to remind children to drink.

While the young end-users can delight in applying the technology, which allows the pets to become pals when children shake their bottles closely together, parents and guardians can call on a smartphone’s WiFi connection to know how much they have downed. Sensors and algorithms make that possible, with the product’s website, well aware of how children can say one thing while having done another (false claims of tooth brushing, anyone?), notes the pets are “smart enough to ignore cheating if your kids decide to water the plants instead.”

Though parents will still hear “but I don’t want to” many times when encouraging healthy choices, Gululu, which last week sent representatives to the UN Ocean Conference, could make all the times they failed to convince their offspring to drink simply water under the bridge.