The summer tour is the most sacred of rock 'n' roll traditions, but it's not just for bands. KIND, the snack company known for its healthy fruit-and-nut bars, is road-tripping across the U.S. from May to August to promote its new frozen treat bars. And, like any good tour, there's merch.

The KIND FROZEN Summer Tour kicked off in New York City on May 25. It will stop in eight other cities before reaching its final destination, Santa Monica, California, in August. At each stop, KIND will dish out free samples of its new plant-based frozen snacks from a fully branded food truck, dubbed the "Better Than Ice Cream" Truck. 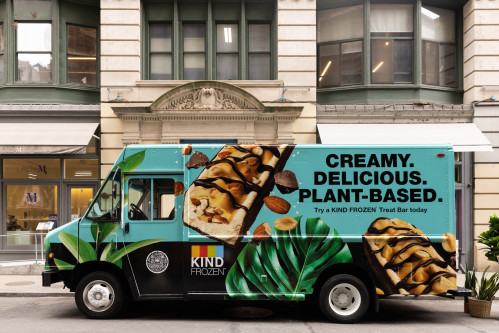 "Since day one, KIND has been committed to creating innovative, premium foods that all lead with a nutrient-dense ingredient, but never sacrifice taste," Russell Stokes, CEO at KIND North America, said in a press release. "We're really proud of the growth we've seen with KIND FROZEN Treat Bars and want everyone to know that we make tasty, frozen bars too. We can't wait for people to try for themselves to believe KIND FROZEN Treat Bars really are as good as we say there are, and plant-based too."

We love a good promotion that involves branded vehicles, and the truck is certainly cool. (The staff uniforms, which appear to include aprons and shirts, are a nice touch.) But we're of course most interested in the merchandise, and this campaign really delivers there.

KIND released three exclusive items to support the tour. They're only available online, which is a bit of a bummer—having them available at the truck as "tour merch" would have been fun. But that's a minor complaint. The items are:

All three items are sold out, and it's easy to see why. The tote offers utility and looks great with its reflective exterior and big, colorful logo. The plant waterer is a unique item that KIND fans can actually use, and it's thematically perfect for this promotional effort. And the press-on nails fall under the cosmetics category, which has been booming in popularity. 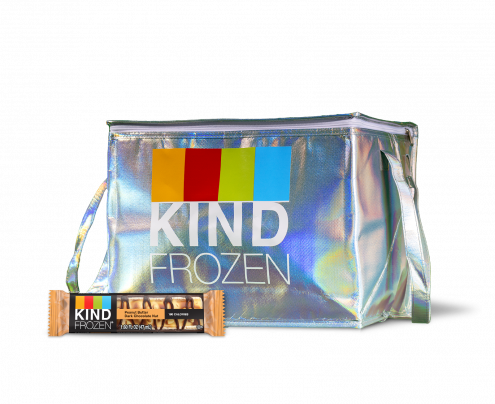 KIND promised that it will restock the items in time for National Ice Cream Day on July 17, but each listing also has a note that directs the user to "check out some alternatives" at KIND's robust online store. That's a nice way to nudge fans toward other merchandise purchases if what they were looking for is out of stock.

Overall, this is a simple but fun use case for branded merchandise. KIND could have gone all out with a wide selection of items, but it instead kept it small and focused with an eye toward utility. This curated approach makes the collection feel even more exclusive, and should generate future buzz when the items are back in stock.

Hey, when you think about it, even that fits the summer tour theme. Everybody loves an encore.