We had no idea this was even in the makings, but Mother Teresa's iconic sari has been officially trademarked. According to BBC News, the saint's white sari with three blue stripes has been trademarked to prevent people from using it for commercial purposes. 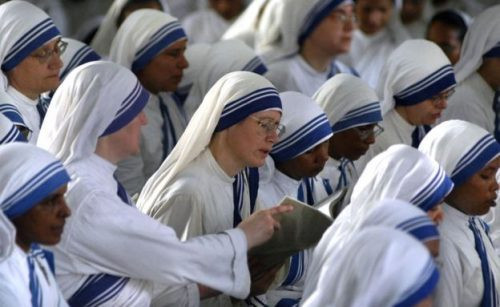 (Image via the BBC)

The Indian government has recognized the sari as the intellectual property of the Missionaries of Charity. While this order was quietly declared back in September, it is only now that the news has been made public.

Biswajit Sarkar, a Kolkata-based lawyer, worked pro-bono on the order, and explained the impetus for his work.

"It just came to my mind that the color-identified blue border of the sari had to be protected to prevent any future misuse for commercial purposes," he told the BBC. "If you want to wear or use the color pattern in any form, you can write to us and if we are convinced that there is no commercial motive, we will allow it."

While Sarkar worked to trademark Mother Teresa's name two decade ago, nuns of the order reported that her name was still being used for commercial gains, with shops near headquarters in Kolkata selling memorabilia and falsely claiming proceeds would be donated to the order.

For now, it is unclear how this trademark will be enforced, and the BBC found that "unisex Mother Teresa dresses" are still being sold online with the blue bordered sari.