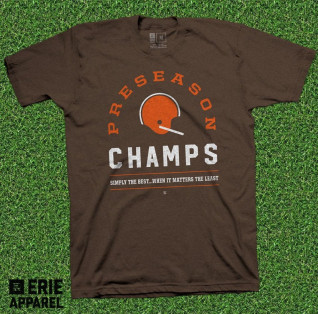 The Cleveland Browns will look to sustain the momentum from their perfect preseason run. (Image via Twitter)

With the recent success that the Cavaliers and Indians have enjoyed, national sports fans could easily declare there must be something special in Cleveland’s water supply. Unfortunately, Ohio residents have long been able to say that the liquid has failed to further the fortunes of their beloved Browns, who have not made the playoffs since 2002. Coming off a 1-15 campaign, the gridiron performers are looking to part with their status as the National Football League’s doormats and have many believing they can surprise a few folks thanks to a 4-0 preseason mark that inspired T-shirt companies to commemorate their undefeated slate.

Here in Philadelphia, the Browns last year served as the season-opening foe for the Eagles and then-rookie quarterback Carson Wentz. They looked utterly terrible in a 29-10 setback, so, knowing of their frequent futility, I casually followed them throughout their slog. What a test that proved! They found themselves in some close games, but they could notch only a Christmas Eve win over the San Diego (now Los Angeles) Chargers. Fast forward eight months, though, and maybe, just maybe the Browns could be ready to join their city’s sporting brethren as contenders or, in the very least, come close to achieving a winning record, something their supports have not seen since 2007.

Preseason contests rarely reveal much about how clubs will fare when the snaps count, but that did not stop fashion entities from comically addressing the flawless journey, which the Browns completed Thursday by playing hostile guests in a 25-0 cakewalk over the Chicago Bears. Based on my bias regarding the exhibition games, I definitely dub Erie Apparel’s “Preseason Champs: Simply the Best… When It Matters the Least” offering as my favorite. Like that garment, the other tops, from such industry presences as Fresh Brewed Tees and The Ohio Apparel Company, do not have “Cleveland Browns” printed on them because of league licensing limitations, but even casual followers of professional pigskin franchises will know the shirts’ intended honorees.

“A year ago, we were 0-4, so these guys came back with a different mentality,” second-year head coach Hue Jackson said of his athletes. “We understand it’s just the preseason, but you’ve got to start someplace. They accomplished something that hadn’t been done in 31 years, which is [to] be 4-0, and that’s a credit to them.”

Indeed, the last Browns incarnation to thwart all of its August adversaries was the 1986 team that advanced to the American Football Conference Championship Game after a 12-4 regular season. It is unrealistic to think this year’s bunch will register a dozen wins, but Jackson’s charges should be more competitive. I wonder how much faith I have in that sentence, as I have never heard of any of the four quarterbacks listed on their roster and know only of Kenny Britt because he is a fossil, fellow wide received Josh Gordon for his substance abuse policy violations and defensive lineman Myles Garrett, who received my pity in April when he became the top pick in the Philadelphia-held draft.

My editorializing aside, the Browns have a passionate fan base, with the bleacher section shouters known as the Dawg Pound, and they will need to rely on that undying affection from their zealots, many of whom took to Twitter to join in on the humor surrounding the T-shirts’ production, to be a force in the AFC North. The division contains the Pittsburgh Steelers, against whom they will open the season on Sunday, and the Baltimore Ravens, who also went undefeated in preseason play. Come New Year’s Eve, when they will take on the Steelers again, the Browns might not be competing for a playoff berth, but even if that is the case, they can proudly proclaim, “At least we had August.”