The Los Angeles-situated art destination will be offering yet another means to examine how the now-70-year-old athlete-turned-actor-turned-defendant has continued to capture the public’s attention. News of the impending display came only a week after the Nevada Parole Board granted Simpson early release for his December 2008 conviction in a Las Vegas-based robbery case. The gallery, however, will not look to profit from that ordeal, as it is restricting its inspection to the matter that had millions hooked on bloody gloves and a white Ford Bronco (and that indirectly initiated the never-ending obsession with the Kardashian family). 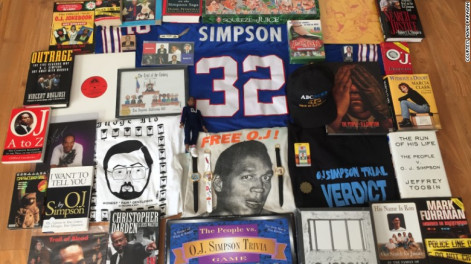 “I’m sure some people might think it’s in poor taste,” curator Adam Papagan said of the pop-up exhibition for which he is charging $5 admission. “But for every one of those people, there’s going to be 50 people taking selfies and making jokes about finding the real killer.”

Tabbing the contents “murderabilia,” the overseer, also responsible for The O.J. Tour, calls the museum “the vernacular of the people” in acknowledging the diverse ways that individuals have tried to chronicle Simpson and his transformation from a lovable gridiron and screen presence to a (mostly) loathable liar and criminal. While attendees can expect to glimpse items related to his Hall of Fame career with the Buffalo Bills and San Francisco 49ers, their eyes will likely fixate on such head-scratchers as bootleg T-shirts, board games, a library and a phone card that features Simpson on an orange juice drink box with "100% NOT GUILTY" below his image.

Many of the materials come from a collection that Papagan, whom the gallery’s website dubs an “O.J. Simpson expert,” has gathered over the last two decades, and, of course, eager parties will have the opportunity to purchase particular components. The inspiration behind the quirky and questionable tribute could be a free man as early as October 1, by which time he will have served not even one-third of his 33-year sentence. While the robbery case that led to his confinement could one day compel someone to create a similar homage to all-things O.J., Papagan will have the limelight in under three weeks.

“The museum is about the phenomenon associated with him, not about him,” he said of Simpson, whom a 1997 civil court hearing found liable for the slayings of his ex-spouse and Goldman, leading to a $33.5 million wrongful death judgment.

Support for that claim comes through the gallery’s inclusion of a wall that celebrates Brown, Simpson’s wife from 1985 through 1992 and the mother of two of his five children, and the aforementioned second victim who also lost his life on June 12, 1994.

“They’re at the center of this,” Papagan said. “I think this is really going to help the public see them as two individuals, not just O.J.’s [former] wife and her friend.”

For extra effect and to the definite chagrin of those who detest the glorification of the five-time Pro Bowl selection and 1973 NFL Most Valuable Player, a Ford Bronco akin to the one that friend and former college and pro teammate Al Cowlings drove Simpson in five days after the murders will rest right outside the gallery, with Papagan having bought it through crowdfunding. Come August 22, the contents of the gallery, which surely will snare ample media coverage, will return to Papagan’s attic but not before further fueling the obsession with Simpson, whose murder trial spawned so many notorious moments and unleashed on the public a host of unforgettable characters.

“If you put this show in a time capsule and [inspect it] 20 years from now, 100 years from now, it would give people a more thorough understanding surrounding the trial of the century,” the soon-to-be-swamped location’s owner, Mat Gleason, said in justifying the distinction of the hotbed as a museum. “…Why did this grasp the American imagination? The answer is in these objects.”

At some point this fall, Simpson will exit the Lovelock Correctional Center and give the public yet another chance to say “The Juice is loose.” The jury has begun to convene with respect to what that could mean for society at large, and it certainly will lead to as many diverse opinions as his entire public persona has created since that fateful June night more than 23 years ago.