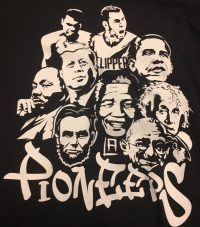 How do the Los Angeles Clippers love Blake Griffin? Let him count the bucks. The National Basketball Association franchise forked over 173 million greenbacks Friday to keep the power forward in California for five more seasons, and while the $34.6-million-per-year average will lead to many head scratches, the courter’s decision to emblazon his image on a T-shirt with historical figures, dubbed LA Pioneers, has already elevated a few eyebrows.

The 28-year-old, who has spent his entire career in the Golden State since the club made him 2009’s top draft pick, appears at the top of the garment, with boxing legend Muhammad Ali to the right of his likeness. The apparel item, which the team’s employees donned following his free agent meeting with ownership, also touts presidents John F. Kennedy, Abraham Lincoln and Barack Obama; singer Michael Jackson; scientist Albert Einstein; and civil rights/independence leaders Mahatma Gandhi, Dr. Martin Luther King Jr. and Nelson Mandela. Many who are even slightly familiar with their clout and accomplishments likely finds the placement of Griffin among them puzzling and perhaps insulting; however, others could simply see it as a hyperbolic, yes, but thoughtful way for the Western Conference member to express its admiration for the face of the franchise.

Given that the Clippers traded point guard Chris Paul, the man responsible for so many of his thunderous Lob City dunks, to the Houston Rockets two days prior to his accepting the lucrative offer, Griffin will face added pressure as his unit looks to remain a force. Long considered their home city’s red-headed stepchild because of the Los Angeles Lakers’ storied history, the fellow Staples Center tenants have notched five straight 50+-win seasons but have not advanced beyond the conference semifinals. Minus Paul, the odds seem long that the Clippers can compete for the NBA championship, as they failed to escape the first round the last two years.

Regardless of that, the owners certainly knew matters would be worse if Griffin were to split, especially since they also lost guard J.J. Redick, poised to join our city's 76ers, so they nabbed the coveted performer days before the league lifts the free agency moratorium, a limitation that expires tomorrow. Having the T-shirt component as an element of continuing the relationship, though, has met with some comedic backlash, including a swipe from a Twitter user who claimed, “I can’t wait for my kids to learn in history class about how Blake Griffin led the Clippers to another first-round exit.” ESPN’s Marc J. Spears also took to Twitter to say that a source close to the club says it distributed the shirt, without Griffin’s image, to players during the preseason as a way to boost morale. No matter when he ended up on the top, we are curious: Should the Clippers cut ties with this shirt, or should they give it a chance to grow through a full-blown marketing push?