Lacoste Aims to Save Endangered Species With Amazing Logo Idea

When you think Lacoste, one thing tends to come to mind: the famous crocodile logo. Although, if you're me, the second thing that comes to mind is the famous pink polo from "Mean Girls":

Well, it looks like Lacoste is ditching its iconic crocodile logo, but it's all for a good cause (and it's only temporary). Lacoste produced a line of limited-edition polo T-shirts that feature the images of 10 endangered species. The "Save Our Species" collection was immensely successful, with the T-shirts selling out online very quickly. But the limited edition collection also brought attention to a very good cause, the International Union for Conservation of Nature. 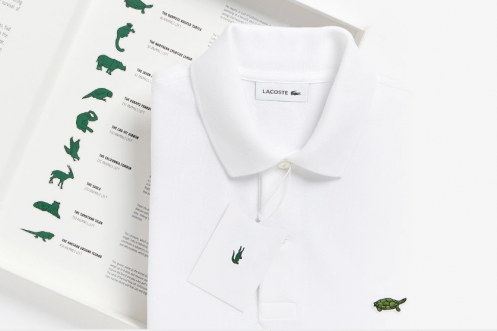 The clever campaign doesn't end at the logo, either. The number of shirts produced for each animal corresponded to the remaining population sizes for each animal.

The T-shirts were launched at Paris Fashion Week 2018, and on top of selling out, they have created quite the buzz. This was a genius idea for Lacoste, and we applaud the creativity.