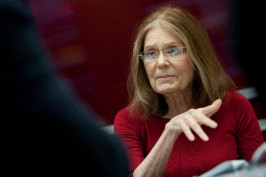 According to Forbes, the disapproval sparked Lands' End to issue an apologize, resulting in all mentions of Steinem being omitted.

Steinem's role in the Lands' End controversy was relatively minimal: She was part of the company's "Legend Series," featuring women who made a difference.

The company also gave shoppers the option to donate to the ERA Coalition Fund for Women's Equality. For every shopper who purchased the ERA Coalition logo on a tote, for example, Lands' End would donate $3 to the group. This customization option also has been removed following the controversy.

“We understand that some of our customers were offended by the inclusion of an interview in a recent catalog with Gloria Steinem on her quest for women’s equality,” the company said in a statement, according to Forbes. “We thought it was a good idea and we heard from our customers that, for different reasons, it wasn’t. For that, we sincerely apologize.”

Now that the company has rescinded its support of Steinem, other customers and social media users are voicing their discontent. Supposedly, shoppers have gone so far as to cancel orders and unsubscribe from the company's emails.