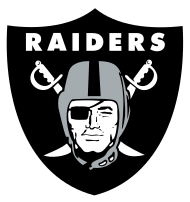 The Oakland Raiders have captured three Super Bowl championships and will look for more glory when moving to Las Vegas. (Image via Wikimedia Commons)

2017 has proven an interesting year for the Oakland Raiders. January 7 saw them make a return to the postseason following a 14-season drought, and March 27 yielded a 31-1 vote among National Football League team owners to approve the franchise’s application to relocate to Las Vegas. The initial date, though it resulted in a 27-14 wild-card round loss to the Houston Texans, inspired belief that the American Football Conference West squad could become a perennial playoff presence and even a championship contender. The second occasion, though, sparked outrage, with pointed backlash even coming from former coach John Madden, and the organization will surely draw more ire from season-ticketholders, who received a commemorative pin set whose contents include a football-shaped “Loyalty” clasp.

The Raiders will not test their luck in Nevada until at least 2019, yet no matter the timeline, backers have gone bonkers over their looming departure, especially since their gridiron heroes again seem poised to return to the level of play that has won the club three Super Bowl titles. The roster includes formidable presences in Pro Bowl quarterback Derek Carr and defensive end Khalil Mack, the league’s reigning defensive player of the year, and while their talents will continue to compel members of Raider Nation to hope for successful Sundays, fans feel betrayed. And the pin set, a picture of which appeared on Twitter yesterday, could certainly come across as an ill-conceived, even hypocritical, keepsake.

Seriously @RAIDERS your season ticket "gift" is a set of crap pins with one featuring "LOYALTY"? You're literally leaving your fan base. pic.twitter.com/RcZGkS65pl

Along with the questionable inclusion of a “Loyalty” pin, the Raiders endowed supporters with “Family,” “Friends” and “Passion” fasteners, as well as a jersey clasp featuring ’17 on the back. Business is business, of course, and the brains behind everything, notably owner Mark Davis, whose legendary father, Al, brought the team to prominence, looked to keep the athletes in California, but the Raiders filed official paperwork on January 19 to head to Sin City, where they will eventually join the National Hockey League’s Golden Knights as sensations.

The pigskin unit is no stranger to changing addresses, as it left Oakland for Los Angeles in 1982 before returning in 1995, but at least the players have always called the Golden State home. Come 2019 or 2020, they will be goners, and one wonders just how much “Loyalty” they will continue to count on from their enthusiasts.