Are We Really Trying to Trademark Stripes Now? 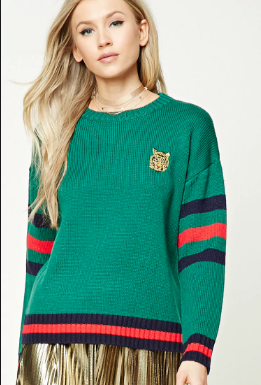 Forever 21 tends to be the company on the receiving end of lawsuits, so we were definitely surprised to see it dishing out the lawsuit this time. According to Hollywood Reporter, Forever 21 filed a lawsuit against Gucci over the trademark of stripes. Yes, you read that correctly—stripes.

These days, nothing is safe from a trademark battle. Just check out this case on cheerleading uniforms that made it all the way to the Supreme Court. Forever 21 has gone to battle over stripes before, suing Adidas for its protection of its famed three stripes.

Forever 21 filed the lawsuit on Monday in the U.S. District Court for the Central District of California, and is seeking protection against the trademark of "a parallel stripe design of alternating bands colored blue-red-blue and green-red-green."

This is only the latest legal action concerning these parallel stripes. Gucci sent a letter to Forever 21 in December 2016 demanding a cease and desist from any use of blue-red-blue stripes. Then in February, Gucci followed up by demanding Forever 21 discontinue all sales of clothes and accessories with the blue-red-blue and green-red-green stripes, including a choker, sweater and bomber jacket.

Now, Forever 21 is asking the court for permission to use the stripes, and it wants Gucci's trademarks relevant to the dispute to be canceled.

It's crazy to see parallel stripes cause such a frenzy, but it begs the question of what can be considered a trademarked design versus a fair-game pattern.