A Lesson in Logo Design From Starbucks' Iconic Siren 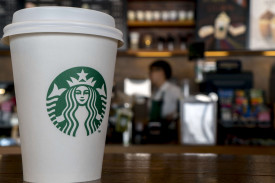 In book 12 of Homer’s Odyssey, we find the hero Odysseus and his men sailing perilously close to the island of the Sirens. These female creatures were said to have such lovely singing voices that their song could lure sailors toward the island, where their ships would be shattered against its cliffs. As Odysseus’ men scramble to plug their ears with beeswax in order to avoid hearing the Sirens singing, the hero requests that they tie him to the ship’s mast. And so, as the ship passes safely by, Odysseus hears the beautiful singing, all the while begging to be untied so that he can swim to the Sirens. Odysseus lives, of course, and adds yet another dangerous, unnecessary accomplishment to his belt (which already includes taunting a Cyclops and indirectly causing the deaths of most of his men). Seriously, Odysseus is a real jerk.

Anyway, the myth of the Sirens as passed down through the Odyssey has led to their representing irresistibility and temptation, which makes them an apt inspiration for Starbucks’ famous logo. That’s right, in case you were unaware, the green woman that graces each cup of Starbucks coffee is, in fact, a Siren. Now imagine Odysseus strapping himself to the mast in order to resist a steaming venti caramel macchiato. Not quite as heroic, though perhaps we caffeine-addicted modern humans could relate on a much deeper level with this image.

Now that you’ve been educated on the nature of Starbuck’s logo, you may be wondering why it matters. While we might be perfectly happy with providing some knowledge fit for bar trivia or Jeopardy, it’s important that we provide content that comes with a business-related lesson, and today’s lesson comes in the category of logo design.

In 2011, Starbucks hired Lippincott to redesign its iconic logo. The designers’ first move was to break the Siren out of the bonds of the circle that had enclosed her image ever since the company’s beginning in 1971. Doing so, the designers also did away with any representation of the company’s name in its logo, instead trusting that the Siren could carry the brand on her own. Once she was free, they went with symmetry in an attempt to adhere to the well-documented association between human notions of beauty and perfectly symmetrical features. While the design looked good, something wasn't quite right about it.

After much debating and head scratching, Lippincott designers realized that, contrary to common knowledge, the symmetrically arranged features actually made the Siren seem cold and inhuman. In order to give her some life, the designers elongated the shadow on the right side of the Siren’s nose. Thus, the current Starbucks logo was born.

This story offers an incredibly valuable lesson in logo design. Take a close look at the logo. While the change is minor, it is instantly noticeable that the longer shadow makes a world of difference. Despite common knowledge, which dictates that humans associate symmetry with beauty, the Siren needed a touch of imperfection in order to seem human. Just like the case of Google’s imperfect G, which foregoes perfect circular symmetry in order to be more pleasing to the eye, Starbucks’ Siren allowed Lippincott’s designers to recognize the inherent attractiveness of imperfection. All it took was a slight tweak and a different way of looking at a design problem.

If that’s not a valuable lesson in both logo design and the arbitrary nature of beauty, then I’m Odysseus. If you don’t agree, then just be sure to untie me when we reach a Starbucks. I promise I’ll only need one shot of espresso, OK? Please?