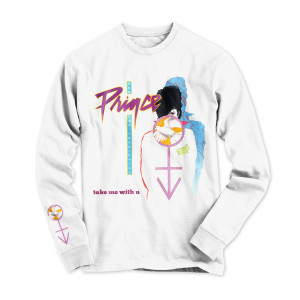 The Take Me With U T-shirt is selling for $40 through the Prince estate's pop-up website. (Image via princehitnrun.com)

In the aftermath of his April 21, 2016 passing, Prince has continued to captivate his legions of devotees, with many wondering what might become of his catalog and what sort of success any tributes to his legacy might have. For fans who go absolutely “delirious” over everything associated with the superstar singer/songwriter, his estate set up an online pop-up store that, through Sunday, will hawk the first official merchandise released since his death.

As has become quite common when artistic geniuses shuffle off their mortal coils, the news of his expiration at age 57 led many to revisit the Minnesota product’s output, with many distraught supporters seeking more than albums to serve as proof of the Purple One’s influence on their lives. The London-situated O2 Arena is tending to that craving to an extent through the “My Name Is Prince” exhibition that features numerous artifacts, costumes and instruments, but for those who want tangible reminders of their connection to the departed dynamo, the wait has proven a 19-month endurance test. Thanks to sister Tyka Nelson and five half-siblings responsible for overseeing an estate that amounts to an estimated $200 million, nobody’s patience need endure any longer, as the “Hit ’N Run” merchandise line offers fashionable justification to engage in music appreciation.

Those who hold an “insatiable” attraction to the Grammy Award winner will make out quite well through a trip to the site, with 12 products available, including Purple Rain T-shirts that might make them exclaim “I Would Die 4 U.” Being somewhat of a Prince buff, I found myself hoping to set my eyes on a raspberry beret, as that object served as the inspiration for a 1985 masterpiece that reached number two on the Billboard Hot 100, but, alas, no such goodie appeared. Vogue, however, reported that the estate has promised more pop-ups, so given that news, the release of the present products, the impending documentary and the fate of his unreleased canon, it is clearly a “sign o’ the times” that as long as those entrusted to preserve a loved one’s body of work do their jobs efficiently, the public will always be in tune with their efforts.