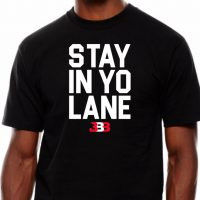 The Big Baller Brand is selling the "Stay In Yo Lane" T-shirt in white print for $50 and gold print for $60. (Image via Twitter)

Language has long proven a great gift for someone to convey confidence and compassion, but the words that come from the mouth of LaVar Ball tend to exude only arrogance and selfishness. His business moves have drawn critiques, too, and his latest marketing decision finds his Big Baller Brand peddling a T-shirt bearing the directive “Stay In Yo Lane,” which he demanded of Fox Sports Radio’s Kristine Leahy last week.

The outspoken, to say the very least, 48-year-old has come to the public’s attention for the hype surrounding son Lonzo, who, after one year at UCLA, will soon make millions following his NBA Draft selection, and for an essentially non-existent filter regarding their would-be apparel and footwear enterprise. Having already lost a chance to secure a major sponsor’s backing, LaVar Ball gained further rebuke after his May 17 presence on “The Herd With Colin Cowherd,” which Leahy co-hosts. She inquired about early returns for his offspring’s $495 (gulp!) shoes, with the guest committing a gaffe by saying “Stay in yo lane.” That reply has generated reactions accusing him of using sexist language through the supposition that “yo lane” means Leahy might be better suited for a non-sports-related vocation. The interview escalated when she noted that he could achieve more commercial renown if he could have his lines appeal more to females.

“Uh, yeah, if you have a women’s company,” he replied. “But, anyways, we’re talking about Big Baller Brand.”

One can debate the degree of indignation and misogyny in his replies, but it’s a slam dunk to realize the man is always thinking about how to grow his bank account. Yesterday, the grating patriarch, whose 19-year-old prodigy intends to work out only for the Los Angeles Lakers, the holders of the second pick in the draft and the long-envisioned team for the wunderkind, tweeted a photo of the Stay In Yo Lane T-shirt, which is also available for women, and, well, it’s garish. Questionable grammar and the use of cap locks aside, the garment comes across as another example of his obsession with making and marketing controversy. His son has not even become a professional yet, and the father is forecasting that Lonzo will become a legend.

That hope might come to fruition, but LaVar, whose motor-mouth led Adidas, Nike and Under Armour to trade possibly huge profits for peace of mind in rejecting his then-$1 billion co-branding shoe deal for Lonzo and the adolescent’s two brothers, lacks any visible trace of humility. As the draft approaches, media outlets will definitely give him more face time and will undoubtedly bring up the T-shirt and his shoe deal prospects. It’s safe to say that the wannabe mogul, who could team up with former NBA star Stephon Marbury to develop a better vision for Big Baller Brand, will soon again let drivel dribble at inopportune times. Here’s to having this Ball deflated for a bit.