Levi's Is Getting Litigious Over Those Little Tabs on Pants Pockets

Owing to its steadfast penchant for protecting its brand identifiers, Levi Strauss & Co. has made many attorneys’ bank accounts heftier, even earning the distinction as “the most litigious (company) in the apparel industry when it comes to trademark infringement lawsuits" through a 2007 New York Times article. The San Francisco-headquartered entity has had an active year fighting back against would-be violators of its sanctioned symbols and is looking to cut down Vineyard Vines in court, claiming that the Connecticut-based clothing and accessory retailer is using posterior-situated jeans and pants tabs that “are highly familiar” to its labels. 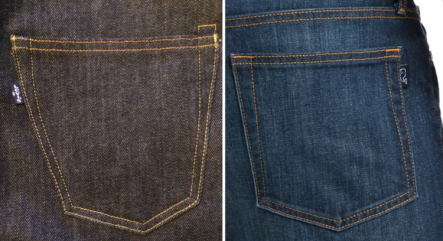 Levi Strauss & Co., left, is suing Vineyard Vines over the posterior tabs that appear on the latter's pants and jeans. (Image via The Fashion Law)

The plaintiff has logged 164 years as a successful clothing industry presence, with last year’s revenue reaching just over $4.5 billion. Its opponent has enjoyed a 19-year presence as a provider of preppy attire and is steadily increasing its assets. Because of the Friday-filed case, with the U.S. District Court for the Northern District of California handling the matter, the latter is going to have to part with some of its amenities to fend off the assertion that tabs on trousers bearing its whale logo “have caused and will cause irreparable harm” to its legal adversary.

Levi’s is reaching back to 1936 as part of its strategy to entangle Vineyard Vines to the point where it will need to cease “manufacturing, producing, sourcing, importing, selling, offering for sale, distributing, advertising or promoting any goods that display any words or symbols that so resemble [Levi’s] tab trademark as to be likely to cause confusion, mistake or deception, on or in connection with any product that is not authorized by or for [Levi’s].” In going back 81 years, the company is saying that then-national manager of sales Leo Christopher Lucier suggested a folded cloth ribbon as a signifier of his employer’s products and held that “no other maker of overalls can have any other purpose in putting a colored tab on an outside patch pocket, unless for the express and sole purpose of copying our mark, and confusing the consumer.”

Numerous tabs have led Levi’s to oversee what The Fashion Law dubs “an arsenal of trademark registrations” for its jeans. That far-ranging protection also led the independent source to state that the apparel titan is “seemingly claiming rights in tabs of virtually any color—with any writing—that are attached to the rear pocket of pants, regardless of whether they are jeans or not.” Due to its aforementioned financial growth, nobody can contend that Vineyard Vines is still a newcomer to conceiving and implementing respected designs, so because of the decision by the Stamford company that brothers Shep and Ian Murray operate to include the whale logo tab on anything, the siblings find themselves accused of “causing incalculable and irreparable damage to [Levi’s] goodwill and diluting the capacity of its tab trademark to differentiate Levi's products from others.”

With respect to the promotional products industry, Levi’s practice of keeping such severe tabs on its tabs can be quite a conundrum for suppliers that might desire to place similar emblems on, say, activewear and/or athletic and uniform pants. Given its gripe against Vineyard Vines, whose counsel it is asking to provide a list of individuals and businesses who have sold the tabbed goods, Levi’s could easily continue to exact its contentious stand against anyone who would even dare to have its products contain a tab. While one could see this as pure conjecture, especially since Levi’s hasn't fully harvested its battle against its foes in a court yet, it is safe to presume that no matter the verdict, Levi’s will one day soon find other issues to quarrel over. Some will certainly be warranted, while others will probably confound the defendants. In short, litigating appears to be in Levi’s genes, so be diligent in making sure your emblems and logos fit all legal standards.

2021 Style Guide: Six Big Apparel Trends to Know (and How to Get Each Look for Promo Clients)
Comments
The Top Lists