Wearable tech is all over both the retail and promotional products space. We're seeing a big increase in popularity for devices like fitness trackers, smart watches and more. More and more companies are implementing technological pieces into traditional or athletic apparel, too. So, Levi's decision to include Google technology into a jacket seems like a smart move for the apparel company. 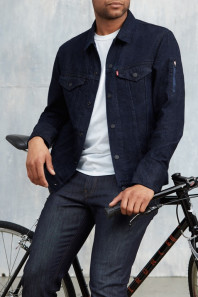 The new Commuter Trucker Jacket includes Google "Jacquard" technology, which lets users use gestures to interact with smartphones. On this particular jacket, users control their mobile phones though a patch of fabric on the left sleeve cuff. A connector, called the "Jacquard Tag" is housed in the sleeve.

"Everyday objects, such as clothes and furniture, can be transformed into interactive surfaces," a spokesperson for Google told Business of Fashion.

The $350, machine-washable jacket debuted at the South by Southwest festival in Austin, Texas last month, and is due to hit shelves by September.

The jacket uses a haptic motor and L.E.D. lights to alert the user to phone calls, pause songs, check the weather or give traffic reports.

"I want to be able to sit down to dinner and not have to look at my phone," said Paul Dillinger, Levi's head of global product innovation. "There's a rich set of input and output engagements."

This is another step that apparel companies are taking to implement technology into traditional-looking garments. For as much as smartphone integration has made its way into the promotional products space through accessories and speakers, more developed wearable technology could be more prominent in the near future.