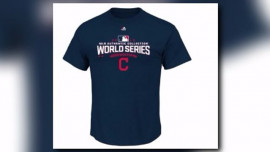 The licensed sports merchandise market could reach almost $50 billion by 2024. (Image via WKYC)

This growth is due, in large part, to improving economic conditions in developing countries, like China and India. Thanks to rising internet use, e-commerce has made a large impact on global sales.

In 2015, sports apparel accounted for the largest chunk of the market at 39.8 percent of total revenues. North America was the largest purchaser of sports merchandise in 2015, too, accounting for about 54 percent of the overall revenue. Despite Asia's anticipated growth in purchasing, North America is predicted to remain the top buyer.

In North America, the MLB and NFL together make up 50 percent of the market in terms of revenue.

And, with growing popularity and the promise of big sales, there's always the risk of counterfeit and pirated goods. As we've reported extensively in the past, major sporting events, like the Super Bowl and World Series, are hotbeds for counterfeit merchandise. For consumers, it's vital to pay close attention to proper licensing indicators, such as hologram tags.