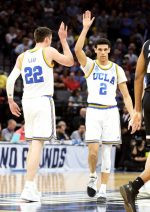 Lonzo Ball, right, helped the UCLA Bruins to reach a spot in the NCAA Tournament's Sweet 16. (Image via Twitter)

While Lonzo Ball seems poised for greatness as he prepares to commence his National Basketball Association career, the 19-year-old will likely have to rely on foreign intervention to find a sole backer for a co-branding shoe deal. With the draft only 52 days away, the proficient prospect is looking to land support after Adidas, Nike and Under Armour, spurred by awkward dealings with his father, LaVar, bailed on the baller.

The patriarch has proven an irritating mouthpiece in touting the talent of Lonzo—who will be a high lottery pick following a standout freshman season at UCLA, and the guard’s brothers, LiAngelo and LaMelo, who will also don the Bruins’ True Blue and gold uniforms. The siblings, who are the inspiration behind their dad’s Big Baller Brand, had been the eldest Ball’s supposed meal tickets for scoring a $1 billion deal. Now, with Lonzo, who escaped sanctions from the NCAA for his image’s presence, since removed, on the brand’s website—on the brink of becoming a millionaire, the family is wondering who will form a partnership to market the footwear.

“We’ve said from the beginning, we aren’t looking for an endorsement deal,” LaVar told ESPN’s Darren Lovell. “We’re looking for co-branding, a true partner. But they’re not ready for that because they’re not used to that model. But hey, the taxi industry wasn’t ready for Uber, either.”

George Raveling, Nike’s director of global basketball sports marketing, foreshadowed the rejection by the trio nearly two weeks ago, calling the 48-year-old mastermind “the worst thing to happen to basketball in the last hundred years.” That SportsBusiness Journal’s World Congress of Sports-situated condemnation has not deterred Ball, who swiped right back and whose next step, based on the same interview with Rovell, involves corresponding with Chinese brands such as Anta, Li-Nin and Peak and a possible non-shoe business entrepreneurial venture.

Given the bravado that his father has shown in projecting a legendary future as a professional, Lonzo, who averaged 14.6 points, 6 rebounds and 7.6 assists per game in his lone collegiate campaign, has become a target for Twitter users with hefty helpings of Schadenfreude to spare. Anyone who watched him when he donned his No. 2 UCLA jersey knows the adolescent could achieve stardom in the league. Like many other outstanding performers across the sports world, though, he could become the subject of another cautionary tale through which a domineering parent hampers or even ruins a child’s shot at glory.

Come June 22, Lonzo, who could, depending on how May 16’s draft lottery goes, become the top pick in the draft, figures to have had a “heel” of a time shaking off the disappointment from the footwear titans’ rejection. However, whatever team that picks him will undoubtedly give the headliner many chances to take the final shot. If he scores that desired co-branding shoe opportunity, he might just have the last laugh, too.

Check Out the Presidential Branding on These Incredibly Rare Obama-Themed Nikes Set to Auction for $25,000
Comments
The Top Lists