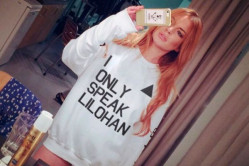 Lindsay Lohan is working with Next Level Apparel and Gildan for her charitable apparel collection. (Image via Newsday)

Lindsay Lohan is turning lemons into lemonade for a good cause. Internet commentators questioned why the actress suddenly is speaking in a different accent in a recent video. Instead of giving into the haters, Lohan has decided to turn it into dollars for charity, according to Newsday.

The actress teamed up with two suppliers—Next Level Apparel, Gardena, Calif., and Gildan Activewear, Montreal, Quebec—for her Lilohan apparel collection. The apparel pieces range from $24.99 to $39.99 with a portion of the proceeds going to the Caudwell Children charity. Each product in the collection features the phrase, "I Only Speak Lilohan."

"I wanted to support children in the U.K., as I have been living there for the past four years and children are dear to my heart," Lohan said in a statement, according to Newsday. "Secondly, I wanted to help the Middle East in this unfortunate crisis. I think it's important we give back when we can and continue to raise awareness."

The apparel only will be available for order until Nov. 21, and orders will start shipping Dec. 7.