Austin Measles had a skydiving accident and broke 52 bones when he hit the ground at nearly 70 mph. After waking up from a coma, while his family waited to learn more about the extent of his long-term prognosis, Measles scribbled a note (unable to speak due to facial injuries). He asked for Liquid Death water.

The water brand, which has been gaining popularity thanks to huge marketing pushes with extreme athletes and comedians alike, found out about Measles' request, and made him a special T-shirt depicting his handwritten request, as well as a visual representation of all of the bones he broke in his fall.

"I'm a very hydrated guy – I'm constantly drinking water," Measles said in a video produced by Liquid Death called "Hard to Kill." "And I was very thirsty, and I really wanted Liquid Death."

Liquid Death presents HARD TO KILL, a documentary about one of our biggest fans who fell out of a plane, broke 52 bones, nearly died, and all he got was a lousy t-shirt. Watch it here: https://t.co/WyBDS12tHQ #liquiddeath pic.twitter.com/fRuG0oE2HJ

Asking for that can of water was actually a way his wife and family knew he was probably going to be OK. It was a pretty common request from Measles.

Measles' wife Haylie reached out to Liquid Death, according to Adweek, and they sent a case of water to his family. In a thank-you note for the case, Measles sent a picture of his scribbled note from the hospital, and the Liquid Death marketing team thought it would be a great T-shirt.

Now, the "Hard to Kill" T-shirt is a two-sided print, with his scribbles on the chest, and a tally mark of 52 bones on the back (along with the Liquid Death logo). 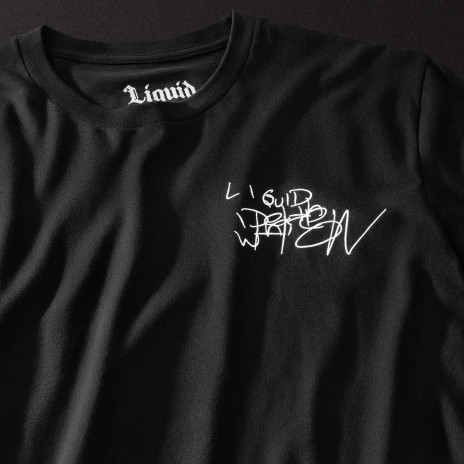 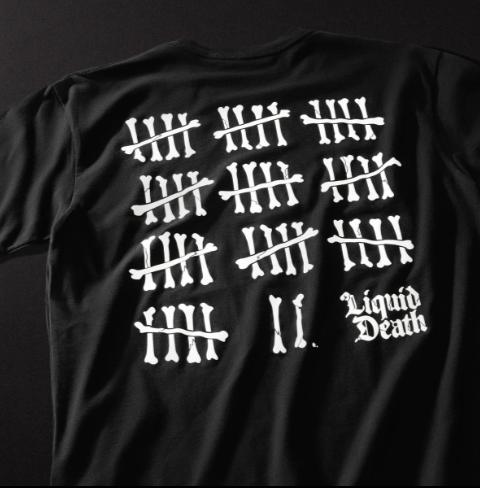 While Liquid Death made the joke that Measles went through all of that hardship and all he got was "a lousy T-shirt," that's not entirely true. Fifty percent of the proceeds from T-shirt sales will benefit Measles' recovery and help him pay his medical bills.

Liquid Death broke into the beverage industry pretty recently, but has hit the ground running with its marketing, allowing it to compete with the big names like Red Bull and Monster (despite being a healthier product).

The company collaborated with skateboarding legend Tony Hawk to screen print a skateboard with his actual blood, and created a workout VHS tape and underwear with comedian Bert Kreischer.

Aside from its celebrity collaborations, they've been releasing a huge amount of branded merchandise. This latest creation isn't even their first hand-drawn design. Liquid Death is currently selling a "Licwid Deth" T-shirt, designed by a 6-year-old.

So, it's safe to say that Liquid Death understands branding at this point. Taking something painful and tragic like Measles' accident and turning it into a funny and poignant branding opportunity is a difficult feat (not as hard as skydiving, though). Having the proceeds go directly to him and his family helps. But, landing on that specific humor target while still showing respect to Measles is really where Liquid Death thrives here.