Earlier this year, Mike Cessario, founder and CEO of Liquid Death, said merch was a "very serious part" of the company's business. Now, the canned water brand is showing us exactly what that means—in the most unserious way possible.

The company teamed up with comedian Bert Kreischer (who is also a Liquid Death investor and brand ambassador) for a 10-minute workout video spoofing those spandex-and-sweatband-heavy '80s exercise routines.

In the video, Kreischer wears a crop-top-ified version of one of Liquid Death's branded sweatshirts and, crucially, a pair of tight blue briefs featuring the Liquid Death logo. Here's a shorter promo version:

Liquid Death, true to its serious-about-merch word, then released the undies—dubbed the "Bert Pro Model Powerbriefs"—on its web store. The briefs (hot pink, rather than the blue seen in the video) were available in five sizes, and each pair was personally autographed by Kreischer. Even at $75 a pop, they sold out.

Also available was a real-deal VHS version of the workout video featuring Kreischer on the cover and some extremely '80s branding. That sold out, too. 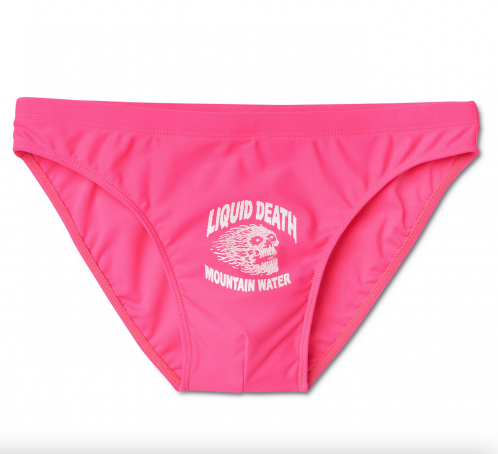 BevNet reported that Liquid Death sold $3 million worth of branded merchandise in 2021, up from $700,000 in 2020. That success prompted Cessario's comments and Liquid Death's commitment to merch as a core part of its non-water business. Cessario even compared the approach to that of bands, like Metallica and Travis Scott, that have turned themselves into lifestyle brands.

"They’re not clothing manufacturers, but I think it all goes hand in hand and not many CPG brands know how to really take advantage of that," he said.

Pink branded underwear and shirtless comedians are certainly one way to take advantage of that. As is a well-stocked online store filled with a wide variety of merch.

That Liquid Death has already figured out how to integrate branded merchandise into multichannel campaigns is a good sign for the brand. You can bet there will be more to come.