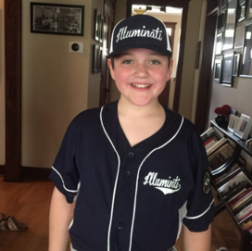 You probably remember the pressure of coming up with a unique name for your little league baseball teams. I'm pretty sure my first grade team named ours the Hurricanes—the peak of originality. Well, this baseball team in Illinois just hit the ball out of the park with their customized Illuminati jerseys, according to BuzzFeed.

Usually 10-year-old kids aren't the most creative with their team names. From Sharks to Lightning, it's hard to stray from the mainstays. But this team showed thinking outside the box can pay off. If you're not familiar with the Illuminati, it's a conspiracy theory that claims Beyonce and Jay Z as secret members, alongside other Hollywood elite. And supposedly, those people control the world government. In other words, it's surprising that a group of 10-year-olds even knows about it.

Not only did they come up with a creative name, but the customization efforts that went into their jerseys deserve attention as well.

Just check out the "Trust No One" patches for the uniforms: 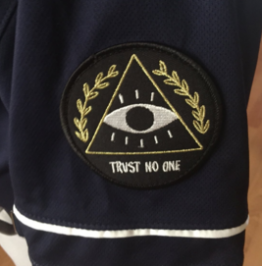 Naturally, the internet went crazy for the customized uniforms, with social media users even asking if they could order hats online to support the team.

While taking risks with branded merchandise can seem precarious, it can pay off in a big way. Now, this little league team from Illinois is reaping the benefits of a viral campaign.

Our 5 Favorite Promotional Products of the Week: Sixers Swag, Giant Bags and More