Live from PRINTING United Expo: Benny Landa Is Creating The World He Wants to Live In

“My presentation is titled ‘Social & Business Success: How Diversity, Inclusion and Other Social Values Can Drive Engagement and Growth,’ Benny Landa says, before a pause. “How boring. I’m simply going to tell you our story.”

His story is nothing short of incredible. Born in Poland to Holocaust survivors, Landa moved to Canada at a young age, where his father purchased a store with a photo shop in the basement. Through ingenuity and creativity, he found ways to keep up with changing passport photo regulations with genius ideas, including using fabric from an old briefcase to create a matte finish.

Years later, Landa is one of the biggest names in print, and has every reason to rest on his own laurels. Instead, he’s still committed to what he calls a “microcosm of the society that I wanted the world to be.” 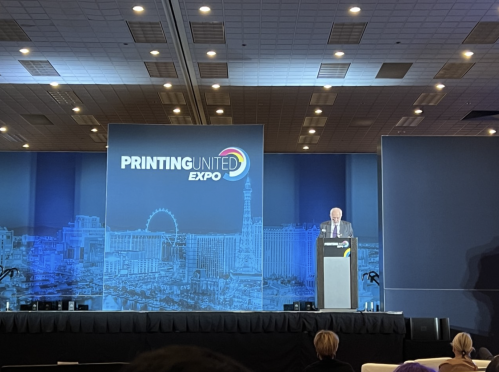 With that, he’s used his business to work toward a higher purpose, which he says is giving all of his employees a reason to get out of bed every single morning and feel good about going to work. To do that, he says that managers and business owners should create the same environment of pride and encouragement that he felt in his home when he would create innovations for his father’s shop.

Through his decades-long career, he’s learned that every customer should feel like they got the better end of the deal.

“Then it’s not a transaction,” he says. “Then it’s a relationship.”