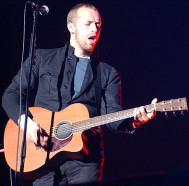 Since the July 2000 unveiling of their debut disc, “Parachutes,” their only release among seven studio albums not to crack Billboard Magazine’s Top 10, Coldplay have enjoyed financial juggernaut status, with the publication’s boxscore announcing Wednesday that the Chris Martin-led quartet has orchestrated the fifth-most lucrative concert tour of all time. The "A Head Full of Dreams" excursions commenced in March 2016 and will continue through mid-November, meaning the British rockers will have ample occasions to build on the brainchild’s $412 million receipts. Along with inspiring fans to sing along to notable tunes such as “Yellow,” “Viva la Vida,” “Paradise” and “Something Just Like This,” the global phenomenon is compelling folks to flout the law, so contends Live Nation Merchandise, which yesterday sued unnamed defendants it holds have infringed upon band-related trademarks by peddling unauthorized materials.

The Boston-filed federal lawsuit targets the unidentified parties ahead of Aug. 4’s show in nearby Foxborough. Set to play at Gillette Stadium, Coldplay will indeed have numerous licensed products for fans to secure, but the plaintiff, which serves as a subsidiary of the Beverly Hills-based promoter and site operator Live Nation Entertainment Inc., wants to punish the outliers who are looking to hawk what will bear “any or all of the group’s trademarks in the vicinity of the group’s concert.”

On behalf of Live Nation, which holds $4.8 billion in revenue, the merchandise overseer is also striving to curtail the unsanctioned sales on future tour stops. Similar matters happen all the time, as musical prophets are always going to be the inspiration behind the acquisition of unapproved profits. Given the tremendous success of this tour —with the Massachusetts date being the second show on its seventh leg—it makes perfect sense for Live Nation to try to go after the reported offenders, whose names, the subsidiary says, will become public knowledge once it ascertains them. For now, John and Jane Does 1-100 and XYZ Company, be aware, as Live Nation is after you for supposedly causing “Trouble.”