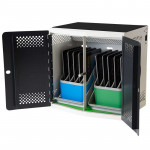 The Consumer Product Safety Commission (CPSC) announced yesterday that LocknCharge Technologies, Madison, Wis., is recalling its iQ10 charging stations due to a defective USB charging hubs that can cause an electrical shock to users.

The company distributed the charging hubs to schools, government agencies and other users from February 2015 to May 2015.

One woman in Australia reported receiving an electrical shock from the device. The CPSC advised all consumers to immediately stop using the item, and contact LocknCharge Technologies for a free replacement charging hub and instructions for replacing the charging hub.