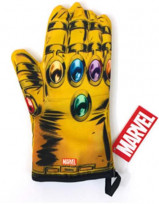 What's something you look for in an oven mitt? I think most of you would answer, "Not making my hands burn." Well, according to the Consumer Product Safety Commission (CPSC), Loot Crate is recalling its Marvel Thanos Infinity Gauntlet oven mitts due a lack of thermal protection. (Or, you know, the one thing they're supposed to have.)

Loot Crate received 241 reports of burn injuries, including incidents where the glove melted and burned the user's skin. The company sold approximately 360,000 here in the U.S., 15,000 in Canada and 380 in Mexico. The company included the oven mitts in its May 2016 subscription box, which was available from April to May.

The CPSC recommended that consumers immediately stop using the oven mitts, destroy them and contact Loot Crate to receive a replacement product of equal or greater value.