Los Angeles Apparel: Picking Up Where American Apparel Left Off 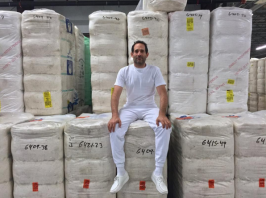 Dov Charney's Los Angeles Apparel is a second chance for him to do apparel his way. (Image via Twitter)

Though American Apparel founder and former CEO Dov Charney was famously ousted from his own company, he may be coming out on top in the end. That is, at least, if you base it off of who is fulfilling their initial vision. American Apparel was once a bedrock of domestic manufacturing and, as an extension, urban development in downtown Los Angeles, which has seen major growth since Charney's American Apparel opened up shop there.

That's not to say it's the only thing spurring development in downtown L.A., but one can't ignore its impact.

Since Charney's departure, American Apparel worked hard on rebranding, but hit hard times, eventually closing all of its retail stores and being purchased by Gildan Activewear. Under Gildan, the company shuttered some of its manufacturing plants in L.A., and even reported that it plans to outsource production for the first time in its history.

What's more, of the about 400 employees that work there, many are former American Apparel workers. Also, about 90 percent of the factory's machinery once belonged to American Apparel.

With his company back on his familiar home turf, with a familiar business model and familiar processes—and with a deal with TSC Apparel—Charney looks more than capable of getting back into the wholesale apparel game in a big way.

For those who might question how he can compete with American Apparel, the answer might be that he already has them beat. Or at least he's on his way.