When the St. Louis Rams announced that they were moving to Los Angeles, fans in St. Louis (rightfully) were upset. Some were so upset that they filed a class-action lawsuit, claiming that the team deceived them by continuing to sell tickets and merchandise while, unbeknownst to the fans, the idea to move the team was brewing. 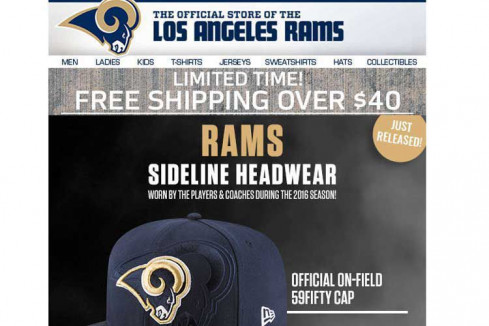 According to the St. Louis Post-Dispatch, the email advertised a deal on headwear coaches and players will wear on the sideline.

"When I got this email, I thought, at first, someone was playing a sick joke on me," Joseph Nassif, a former St. Louis season ticket holder, told the St. Louis Post-Dispatch. "When I realized it was from the Rams, I was shocked."

"Sending an email wanting me to buy more gear right around the time I'd normally be getting my season tickets in the mail—no surprise, consiering the way they've treated fans and this city," said Todd Thrasher, another St. Louis-based, former season ticket holder. "I'm one of those long-time season ticket holders who was lied to right to my face by [Rams' chief operating officer Kevin] Demoff. It was easy for me to just hit 'unsubscribe.' I just hope the Rams organization didn't hide some malware in that 'unsubscribe' link!"

A spokesperson from the team told the St. Louis Post-Dispatch that the organization sent the email to fans in the St. Louis area by mistake, using an old database.

This wasn't even the first time the Los Angeles Rams added insult to injury. In May, a Rams ad appeared behind home plate when the Los Angeles Angels of Anaheim played the St. Louis Cardinals.

Poor St. Louis Rams fans. They can't even escape to baseball without a constant reminder.