Louis Vuitton Loses Legal Case Against My Other Bag Brand 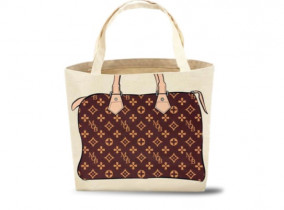 My Other Bag's Zoey Tote

LVMH, the umbrella company behind Louis Vuitton, lost its case against parody canvas bag-maker My Other Bag.

Launched in 2012, My Other Bag sells canvas tote bags with representations of Louis Vuitton and Céline handbags on the sides as known parody handbag designs.

According to The Fashion Law, U.S. District Judge Jesse M. Furman of New York state, ruled that there was no case of trademark infringement or copyright infringement for LVMH.

"Louis Vuitton is, by its own description, an 'active and aggressive' enforcer of its trademark rights," Furman said in the case. "In some cases, however, it is better to 'accept the implied compliment in [a] parody' and to smile or laugh than it is to sue."

"I can't tell you how thrilled our entire team is to get this win, not only for the My Other Bag brand, but for other entrepreneurs, writers, artists, film makers, designers, anyone who uses their creativity and voice to make a statement," Tara Martin, CEO and founder of My Other Bag, told The Fashion Law. "Parody is one of the oldest and most beloved ways in our culture to address social, economic, and political issues. One of America's founding, and to us, most important principles, is freedom of speech and it must be protected and fought for."

So far, there has been no statement from Louis Vuitton on whether or not it will appeal the decision.