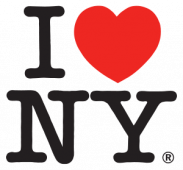 Everyone who's been to New York City (and, honestly, probably a lot of people who haven't) are familiar with the iconic "I Love New York" logo. It's pretty much the most omnipresent tourist souvenir from the Big Apple, adorning T-shirts, mugs, sweatshirts, keychains, you name it.

And it almost didn't exist.

To celebrate the logo's 40th anniversary, its creators told The New York Post a little bit about how the logo came into being.

The Post reported that New York's state government wanted to bring people in from out of state. Which, in the 1970's, wasn't as easy as it is now, thanks to New York City's past problems with crime, litter, corruption, etc.

It didn't become an instant hit, so as a last-ditch effort to win over his team, Glaser drew up the "I [heart] NY" logo we know today with a crayon while riding in a cab.

"The big secret of that is replacing a verb with a noun," Glaser told The New York Post. "The 'I' is a complete word, the heart is a symbol for an emotion, and 'NY' is the initial for a place. So you have to figure it out, otherwise it's impenetrable. It's a puzzle that is easily solved."

Living in our world of text shorthand and emojis, that doesn't exactly seem like a puzzle. (We've received much more puzzling texts when our parents learned how to use emojis and substitute them in for normal words.) But, at the time, Moss and the advertising team thought the design wasn't clear enough.

To show the effectiveness, though, Doyle had two T-shirts made to show the idea in a tangible sense. He and his girlfriend wore the shirts to Bermuda during a vacation.

"People came up to us on the beach and said, 'Oh, my God, I love it,'" Doyle said. "I can still see the ladies. It brought huge smiles, and people's eyes were glistening. It really worked."

Doyle said that trip to Bermuda was "the moment of truth."

And just think: If he had taken no for an answer when his team said the idea wasn't clear enough, New York City might have some long catchphrase to bring in tourists.