If it wasn't the immediate downfall of Virginia, North Carolina's loss to Texas A&M or Nevada over Cincinnati, chances are Loyola Chicago's unlikely Final Four run has ruined a few brackets.

However, at least one person outside of the Loyola Chicago team has maintained the faith that the Ramblers would go far in the tournament, and that is team chaplain Sister Jean Dolores Schmidt.

For the uninitiated, Sister Jean is the 98-year-old team chaplain, and has become a focal point of this year's tournament for her presence at the games.

To celebrate Sister Jean as an unofficial sixth player on the court, the team got her blessing to create Sister Jean promotional products, including bobbleheads, socks and T-shirts, according to NBC Chicago.

Loyola Chicago is selling about 25 different Sister Jean T-shirt designs on campus, where she's a known presence to students and student-athletes alike. 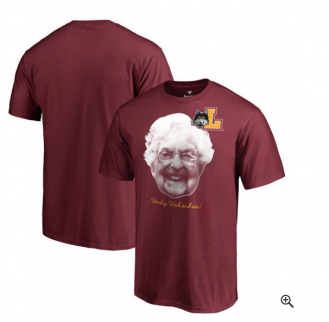 Her former students say that, despite her age, she's just as energetic as she always was.

"One thing she personifies is that, even though we're older, we're still interested in working with people and helping, fighting for injustice and education," one former student told NBC Chicago. "Sister Jean taught us that, too."

Every hour it seems like there’s new Sister Jean merchandise hitting the market. This one is not licensed by Loyola. pic.twitter.com/vEyUCDMAyn

It's hard to root against someone like Sister Jean, and, by extension, the Cinderella story of Loyola Chicago, who are in the Final Four for the first time since 1963. We can put bracket predictions aside just for a minute, and appreciate the spirit Sister Jean represents in such a cutthroat time in sports.

(Editor's note: When my Temple Owls make it back to the Final Four, I hope our most famous alumni, Hall and Oates, inspire apparel.)

MTV 'Merch Masters' Is a Design Competition For Promotional Products