Lululemon, Under Armour Battle in Court Over $52 Sports Bra

Sometimes, it's a legal battle over three stripes, and other times, it's a head-to-head over a sports bra. Wait, we take that back, because this battle is actually just over the sports bra strap. And neither Lululemon nor Under Armour is backing down. 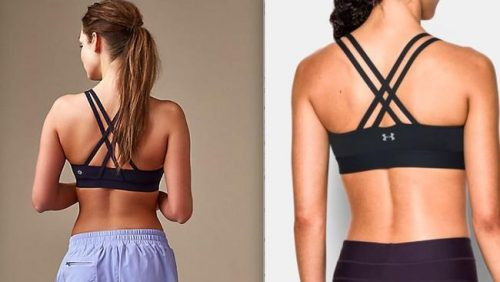 According to Fortune, Lululemon filed a legal complaint against Under Armour for a design patent infringement. The design is a sports bra strap consisting of four criss-crossed pieces of fabric.

Lululemon believes four of Under Armour's sports bras, which range from the $29.99 Armour Strappy to the $39.99 Armour Eclipse Low Impact sports bra, are stealing Lululemon's design for its beloved $52 Energy Bra.

In the legal complaint, Lululemon claimed these infringements could cause "irreparable damage" to its business.

You might be wondering why there's so much heat over a sports bra. It seems sports bras are one of the fastest-growing categories in the athletic apparel business, with $1 billion in U.S. sales last year, according to the Baltimore Sun.

While the Baltimore Sun pointed out that it's rare for fashion brands to go to the legal trouble of upholding their designs in court, it seems Lululemon is familiar with these types of court battles. In 2012, the company sued Calvin Klein for copying its waistband design on its Astro Pant. The two companies eventually settled out of court.

We'll see which way this court battle goes, but if Lululemon wins, we suggest you steer clear of sourcing inspiration from their designs.