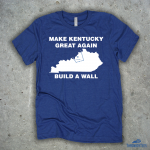 With an estimated population of 620,000, Louisville, Ky., has nearly twice as many residents as Lexington, the second-most populated city in the Bluegrass State. However, the latter has always tallied more fervent college basketball fans, with the state university’s Wildcats, based in Lexington, having blessed its backers with more than 2,200 wins and eight national championships. With almost 1,800 victories and three titles, the Cardinals have proved legendary, too, but not enough to keep supporters of their commonwealth counterparts from roaring with delight over a T-shirt riffing on Donald Trump’s campaign slogan.

A map that blocks Louisville off from the rest of the state comes between the proclamation “Make Kentucky Great Again” and “Build a Wall,” proving a play on the 45th president’s promise to “Make America Great Again” by erecting a wall between the United States and Mexico. As the work of in-state producer Throwboy Tees, highly familiar with the hoops rivalry that the Wildcats lead 34-16, the item has inspired plenty of discussion and ample sales, with owner Jared Lorenzen noting lucrative returns during the general election’s end stages, which coincided with the beginning of the college basketball calendar, and steady totals throughout the NCAA Tournament.

Owing to the Cardinals’ second-round loss in the postseason extravaganza, the Wildcats’ Big Blue Nation surely would have had additional bragging rights had its heroes secured another championship plaque, but the John Calipari-coached squad fell to the University of North Carolina Tar Heels in the Elite Eight. The shirt has thus far escaped the watchful eye of the Trump Administration, with Lorenzen stating that a hat bearing the same message is no longer available thanks to a cease-and-desist letter.

“We thought because we do a lot of Kentucky content that it would make the state better if we just didn’t have Louisville,” Lorenzen, who quarterbacked the University of Kentucky football team from 2000 to 2003, said of the marketing move.

With the college basketball season having ended Monday, pundits have already begun pondering who could be celebrating a title run next April, with the Westgate SuperBook tabbing Kentucky, Louisville and Duke as the frontrunners. If the Trump team does not enforce restrictions on Lorenzen’s T-shirt brainchild, look for the Wildcats and Cardinals’ end-of-the-year clash to be a continued wardrobe-infused call to section Louisville off from the rest of the state.