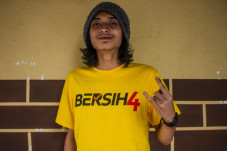 A Bersih 4 T-shirt; Image via The Malaysian Insider

A Malaysian High Court upheld a government order claiming a certain T-shirt is a national security threat. The shirts say "Bersih 4," which is the name of an anti-government demonstration that took place in the Malaysian capital city Kuala Lampur last August. "Bersih" means "clean" in Malay, representing the protestors' demands for a clean government, after Prime Miniser Najib Razak reportedly deposited $700 million into his personal bank account.

According to The New York Times, Malaysian Home Minister Ahmad Zahid Hamidi banned the shirts and fliers promoting the Bersih 4 protests before they even took place. Nearly 100,000 protestors wore the shirts anyway.

"The T-shirts have now become a symbol of our struggle for democracy and human rights in Malaysia," Maria Chin Abdullah, chairwoman of Bersih 2.0, an advocacy group that organized the Bersih 4 protests, told The New York Times.

Muhammad Yazid Mustafa, a Malaysian High Court Judge, announced last week that he would uphold the ban on the shirts, but has not issued a written ruling yet. He said that the ban falls within Hamidi's authority to maintain public order.

Abdullah told The New York Times that Bersih 2.0 would challenge the band in the High Court.

"I don't know where they got the idea we are a national security threat," she told The New York Times. "We are going to challenge this decision."

Khoo Ying Hooi, a columnist for The Malaysian Insider, was critical of the court's ruling:

The decision is a major blow to freedom of expression. While it could be true that Malaysians are becoming more partisan as a result of the country's political developments in recent years, another trend that we should not dismiss is that the political awareness among citizens has also increased.

Under this ruling, anyone caught wearing the shirt could be fined $1,185. Some protestors have been detained for wearing them, but there are no known reports of any prosecutions or fines so far.

The No. 4 in the shirt's message represents that this is the fourth demonstration organized by the group. The Malaysian government successfully banned Bersih 2 shirts as well, but shirts from the first and third demonstrations are still legal.

The Malaysian Insider reported last August that the group printed 35,000 Bersih 4 T-shirts and sold out quickly. It sold out of T-shirts after each restocking effort as well, with an average 200 shirts sold hourly last August.