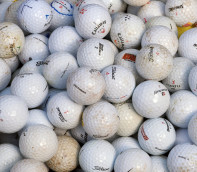 Golf balls tend to be pretty nondescript unless a well-chosen logo adorns them. | Credit: Wikimedia Commons

One could certainly say, and make a horrible pun in the process, that Don Thompson has an eagle eye for finding noteworthy golf balls. With approximately 15,700 of the dimpled delights, the Wisconsin inhabitant has amassed an amazingly varied collection that shows just how compelling promotional products can be.

Collectibles always provide a wealth of opportunities to examine why said objects possess such allure. Bobbleheads make for great studies in consumers’ penchants for acquiring promotional tokens, as some collectors enjoy them simply for their novelty, while others enjoy associating them with particularly cherished moments. Drinkware items can possess the same I’ll-have-another attraction, as can numerous other objects. But what would compel someone to start a golf ball collection? To Thompson, answering that is as easy as converting a short putt.

“I thought, ‘God, that’s interesting, a logo like that,’” the 93-year-old said of a Baby Ruth-branded ball he saw 31 years ago while playing with three pals. “And that’s the first one I collected.”

For Thompson, then, adding the balls has become a way to commend creativity, as he told the Journal Sentinel that no duplicates have crept into his collection. In acquiring enough projectiles to propel even the worst golfer to an interesting day on the course, he has been able to display nods to local businesses, corporations and a married couple he has never known, among other products.

Don Thompson admits he struggled to get the ball in the cup. But he had no problem filling his basement with golf balls. https://t.co/n8oA4CDLmr

His condominium’s basement has become his haven, and if one does the math, the size of his assortment means that Thompson has taken on an average of 506 balls per year. With such devotion to collecting, he has chosen to track them alphabetically on a computer, and has received ample support from kith and kin in intensifying his hobby. (You have to applaud a guy who, without saying a word, makes it known what he would like for his birthday and Christmas, right?)

Due to the agreeable nature that he exudes in the Journal Sentinel profile, we imagine that he probably lights up each time a new offering sends him to his computer and basement. That joy, then, helps us to understand even more the power of promotional products. Unadorned, a golf ball is just a lonely object seeking a temporary residence. Decked out with a logo, it can be a commodity that commands a forever home. In this case, Thompson has become a proud provider of such an abode, and thousands of recipients of his curiosity have earned added brand recognition. That is almost as good, almost, as draining a long putt to secure a birdie (as if I would know what that is like!).