How Mark Cuban Could Be Saving the Hoverboard

It seems the Consumer Product Safety Commission damnation and multiple tragedies caused by hoverboards weren't enough to fully take them off the market, as the hoverboard is getting the "Shark Tank" (or Dallas Mavericks) treatment. Just make sure you don't call this model a toy, because it's seriously meant for serious adults, apparently.

Business Mogul Mark Cuban is backing the Radical MOOV, a type of hoverboard product made by Nick Fragnito and Evan Williams, the founders of Radical Transport. 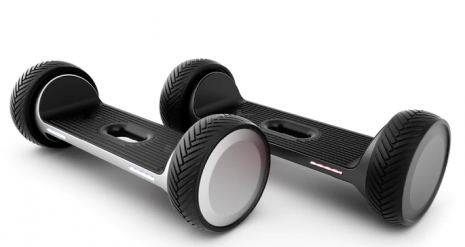 The creators of the Radical MOOV are hoping to achieve UL certification for the hoverboard-like product. (Image via Kickstarter)

After the company got its first prototype working while the news of exploding hoverboards hit the press, Fragnito and Williams should have been concerned, but, along with Cuban, they saw it as an opportunity for their business.

Cuban told Business Insider that he was "confident [Fragnito and Williams] would be able to build a board that was better and far, far safer."

It would have to be, since the CPSC announced that all hoverboard products on the market were inherently unsafe. The anti-hoverboard movement intensified after two children were killed in a house fire after a hoverboard caught fire in the living room.

But, unlike the hoverboards we've gotten used to, Fragnito and Williams are adamant that their product is not only safer, it's not a toy.

"It is much more vehicle than it is a child's toy," Fragnito told Business Insider.

Considering the MOOV will cost about $1,500, that makes sense.

The company is currently testing its prototypes, and doesn't have a release date planned yet, but feels that it will become a legitimate form of transportation, rather than just something kids ride around the house.

Unlike existing hoverboards, the design utilizes the rider's weight to turn, rather than foot positioning. The user can also tailor the controls to his or her own skill set.

But, how will it be any safer?

Fragnito and Williams traveled to China to observe production on traditional hoverboards, deciding that they needed to completely redesign it to make it safer and more cost-efficient.

Through manufacturing in Dallas, the partnership hopes to achieve UL compliance for their product—a feat only achieved by six companies that make hoverboards. By getting that UL certification, they'd be able to go around the CSPC mandate that non-compliant products can't be sold in stores.

So, maybe the hoverboard isn't completely gone. It just needed to be tweaked. If that's the case, this could present a fun opportunity for distributors to give new means of transportation to end-users. Think big offices and schools.