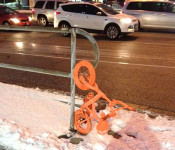 In August, we posted that a gym in South Hill, Wash., used spray-painted bikes as marketing tools, but locals mistook the bikes for tributes to deceased cyclists. Now, the same gym, Orangetheory Fitness, tried the stunt again in London, Ontario, and it turned out the same way.

According to The London Free Press, about a dozen orange bikes appeared chained to poles in London. Hifa Maleki, senior director of operations for Orangetheory Fitness Canada, told the London Free Press that this was a "guerrilla marketing" campaign that the company uses.

But, just like in South Hill, Wash., London residents thought the bikes were "ghost bikes," which are spray painted white and placed at the scene of a fatal cycling accident.

"We're very sensitive to [ghost bikes,]" Maleki said to The London Free Press. "We're not just going to leave it and say, 'Hey, at least people are talking about it.' We don't want to take anything away from ghost bikes. Just because it worked in 98 percent of markets doesn't mean it will work everywhere."

According to ghostbikes.org, there are more than 500 ghost bikes in more than 180 locations worldwide.