Marketing Win: How Disney Turned a Negative Into a Positive With Promotional Merch 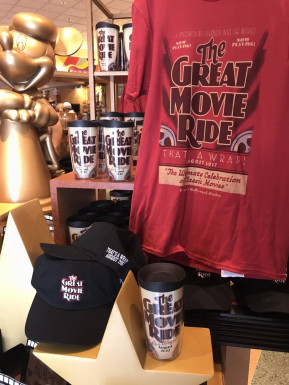 The Great Movie Ride opened in 1989. Mickey and Minnie's Runaway Railway will replace it at Disney's Hollywood Studios (Image by @DisneylandDrive via Twitter)

Sunday registers as a period of repose in many cultures, but when aficionados learned last month that Walt Disney World would be granting eternal rest to a pair of beloved rides, there was no chance they would let August 13 pass without a blast. Shuttering the Great Movie Ride and Ellen’s Energy Adventure, the Orlando attraction offered captivated connoisseurs their final physical opportunities to enjoy the attractions and peddled products to help them retain the marketable magic for which it will be forever famous.

The diversions, which had charmed the masses since 1989 and 1996, respectively, inspired the overseer to hawk hats, ornaments, pins, T-shirts and travel mugs that could soften the emotional blow while also catering to collectors. Disney, of course, will never suffer from a lack of inventive promotional concepts, and these latest entrants into its merchandise empire are reverent of the influence that the rides had on patrons. While they can no longer feel energized through an Epcot Center trip to hear Ellen DeGeneres, Bill Nye the Science Guy and other figures discuss energy resources or relive cinematic achievements via a Hollywood Studios stop, devotees can dote on Disney through items declaring “That’s a Wrap! August 2017” and “Extinct: August 2017.”

What many might consider an ominous month (especially since the last Ellen’s Energy Adventure experience ended interestingly), will prove profitable, for sure, for Disney, which is no stranger to closing attractions, but will also yield intense anticipation—a Guardians of the Galaxy ride and Mickey and Minnie’s Runaway Railway will eventually replace the cherished duo. In striving to “commemorate special moments in our parks,” Disney will also sell the keepsakes on its titular store, with many individuals sure to look to make a few (or a ton of) bucks via eBay.

With such storied histories, Ellen’s Energy Adventure and the Great Movie Ride certainly encouraged numerous children to be curious about the world around them, so kudos to Disney for commemorating their allegiance instead of simply letting their memories fade. The rich are getting richer, but here, that refers more to emotional abundance than economic prosperity.